A life among budgets, bulldust and bastardry 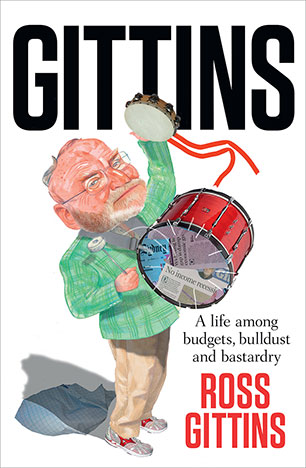 The honest, robust and intelligent recollections of one of Australia's pre-eminent economic journalists - as insightful and entertaining as the man himself.

For forty years Ross Gittins has had a ringside seat as the Australian economy has gone through radical change. He's covered forty budgets and sixteen elections, he's watched thirteen treasurers and eight prime ministers wrestle with boom and recession, debts and deficits. Few economic journalists have earned such respect for their views from participants and readers alike. His even-handedness and his clarity of vision have left countless readers better informed about how the complexities and contradictions of the modern economy affect our daily lives.

Thrown into the deep end as a cadet journalist, Ross covered his first mini-budget lockup in 1974, and was soon covering the financial roller coaster ridden by the Whitlam government. From then on, no government and no treasurer has escaped analysis - he anoints Keating, Costello, and Swan as his three best - and throughout the book he critiques without fear or favour the ministers and bureaucrats who have shaped our economic wellbeing.

This son of a Salvation Army major and one-time accountant is an old school journo through and through. With four decades of printers' ink in his veins, he dissects the newspaper game, remembers the great editors and journalists who have sharpened our minds and his, and lays down some hard facts about a hard future.

Honest, robust and intelligent, Gittins is as insightful and entertaining as the man himself.
More books by this author

Ross Gittins is the Economics Editor of The Sydney Morning Herald and an economic columnist for The Age. He is a winner of the Citibank Pan Asia award for excellence in financial journalism and has been a Nuffield Press fellow at Wolfson College, Cambridge, and a journalist-in-residence at the Department of Economics at the University of Melbourne. Ross is frequently called upon to comment on the economic issues of the day and has written and contributed to many books and periodicals. His most recent books are Gittins' Gospel, Gittinomics and The Happy Economist.