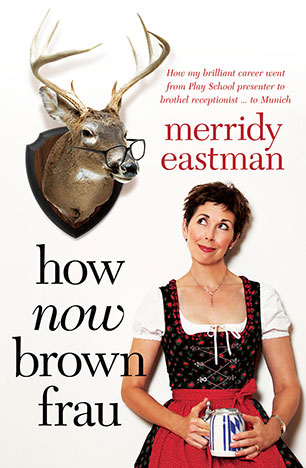 A poignant, revealing and hilarious memoir about what happened when a former Playschool presenter (and brothel receptionist) woke up one morning in Munich four months pregnant, without a word of German under her belt, and surrounded by Bavarians! It's a tale about friendship, marriage and motherhood and how even a feminist can own a Dirndl.

In her first book, There's A Bear In There, Merridy Eastman led us into the forbidden world of a Sydney brothel where she once worked as a nervous receptionist. In Ridiculous Expectations she packed us into her suitcase and took us on her British book tour where, instead of finding Mr Darcy as promised, she was swept off her feet by a tall German called Tom. Who knew?

In How Now Brown Frau Merridy plunges headlong into a new life in Bavaria where she takes up residence four months pregnant and without a word of German under her belt. Here we meet her conventional Bavarian inlaws, climb excruciating language barriers (not to mention a few alps) and grapple with a culture that seems at times to be on a whole other planet. A world of challenge opens up before us - the food, the weather, the customs, the traditional religious greetings, the silence on public transport, and of course the Freikorperkultur, or nudism, acceptable even in Munich's central public gardens. But with help from some wonderful expat friends, Merridy grows to love the beautifully restored ancient city, and to realise that travel doesn't just broaden the mind, it can also open the heart.

How Now Brown Frau is laugh-out-loud funny and all the more so for being completely true. This is What Merridy Did Next.
More books by this author

A NIDA graduate, Merridy Eastman has performed in a swag of productions for the Melbourne and Sydney Theatre Companies and spent several summers leaping about botanical gardens across Australia, bringing Shakespeare to the masses. As well as being an ex Playschool presenter, Merridy has had major roles in many television shows including Neighbours, Blue Heelers, Always Greener, and has recently joined the cast of Channel Seven's Packed to the Rafters. She is the author of the best-selling There's A Bear In There and Ridiculous Expectations, contributing writer for Breast Wishes the musical, and consequently for Penguin's anthology Thanks For the Mammaries.