The many lives of an extraordinary Aboriginal woman 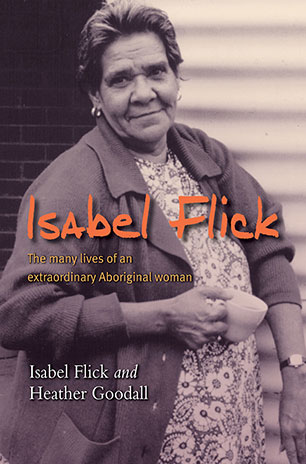 The remarkable life story of a leading Aboriginal community activist who grew up in a camp in northern NSW, and worked on health, education and other social issues across the state.

'And I said that to this old fella to this old fella at the ticket box: I want you to come and fix this. Take these ropes off! What do you think we are? Our money is as good as anyone else's and we want to sit where we want to sit. I kept standing there in front of the ticket office, and by then my sister-in-law was there too. The two of us, making trouble! And my poor little heart, I don't know how it stayed in my chest'

Isabel Flick was always making trouble. This is her story, told in her own words and those of her family and friends, beginning on the riverbank camps of Collarenebri, where at an early age she was barred from formal education and threatened by the Protection Board with 'removal'. She then moves from the harsh controls of Toomelah Mission to the cotton fields of Wee Waa, from cooking for the upper classes in Rose Bay to marching in the street protests of Redfern and lobbying in the halls of Parliament House.

She grew up to challenge the suffocating racism of rural Australia, demanding desegregation and justice in education, work, health and before the law. But Isabel's courageous fight was not only directed at the non-Aboriginal community. She was not afraid to speak openly about injustice among her own people.

All who knew Isabel were moved by her. She was the hub of a wide network within the Aboriginal community, linking the many people with whom she had worked and campaigned. She was extraordinary too in developing a strong network among non-Aboriginal people.

And eventually, returning to the riverbank of the Barwon, Isabel's enormous political experience and courage were acknowledged by the non-Aboriginal people of her town. It was Isabel who was chosen by Collarenebri whites and blacks as their spokesperson during a crisis which threatened them all.

Reflecting on the meaning of community, country and tradition, this beautifully crafted story is truly an inspiration - one of love, humour and courage, and always a profound sense of justice and understanding.

'If I had to name five people who are true leaders, Isabel would be one of them.' Linda Burney, MP
More books by this author

Heather Goodall lectures in history at the University of Technology, Sydney. She is author of Invasion to Embassy.