It's Every Monkey For Themselves

A true story of sex, love and lies in the jungle 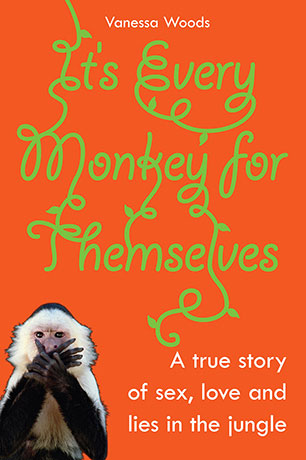 Big Brother meets Gorillas in the Mist in this story of a young woman grappling with the usual big issues - love, sex, friendship, and figuring out what she wants from life - while at the same time attempting to conduct research on capuchin monkeys, shoot a documentary and not get herself killed in the jungles of Costa Rica.

Aiming to put as much distance as she could between herself and a dysfunctional relationship, Vanessa Woods left her Pleasantville life in the leafy but safe suburbs of Canberra and headed for the remote, wild and distinctly unsafe jungles of Costa Rica. She had a research job, a contract with Disney Channel and would spend the year working with a small community of dedicated like-minded scientific souls researching the behaviour of capuchin monkeys while making a documentary about Costa Rican wildlife. Or so she thought.

As it turned out, Vanessa's housemates in the monkey house didn't appreciate her Australian sense of humour, she was stung so often by wasps and killer bees she developed a lethal allergy, and the monkeys were evasive, mean and aggressive - with the only difference between them and her housemates being that at least she could tell her housemates apart.

Over the course of a wild, bruising and tumultuous year that can most accurately be characterized as Dian Fossey meets Big Brother, Vanessa learned that not all monkeys - or people - are alike, that friendship can be more important than sex, and that sometimes it takes a brush with death and an abscess the size of a melon on your head to make you realise that being pretty isn't always enough.

This is a story of love, loss, bitter rivalry and vicious battles - and that's just the monkeys.
More books by this author

Vanessa Woods is a feature writer for the Discovery Channel. She has written two books for Allen + Unwin, It's True: There are bugs in your bed and It's True: Space will turn you into spaghetti, with a third book in the same series on the way.

She has written for a large number of publications including New Scientist, BBC Wildlife and Australian Geographic. In 2003, Vanessa won the Australasian Science award for journalism.

She also studies the psychology of bonobos and chimpanzees in Africa.

Chapter 6 Love in the valley of the mist

Chapter 14 Revenge of the bees