Keep Your Head Down

One commando's brutally honest account of fighting in Afghanistan 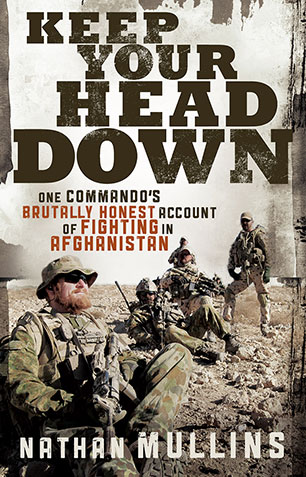 A brutally honest, poignant but at times hilarious account of fighting in Afghanistan with the 2 Commando Company of the Australian Army Reserve.

Nathan Mullins deployed to Afghanistan as a Special Forces Commando. Spearheading Australia's Special Operations troops, he and other Australians like him sought the Taliban in the valleys and hills of Uruzgan through Afghanistan's harsh winter while at the same time attempting to bring a human face to the villagers caught in the middle of the fighting. They lived with the daily threat of roadside bombs, ambush and firefights, where survival meant learning to read the signs to determine friend from foe. And they did what they could to relieve the awful effects of war on the men, women and children of the civilian population caught in the crossfire.

But these were not your regular soldiers. Sure, they had trained for years for the role but these were citizen soldiers, reservists who had put aside their usual jobs as salesmen, farmers, scientists, lawyers and students to fight Australia's 'war on terror'.

Keep Your Head Down is a brutally honest, first-hand account that takes you into the centre of the action and asks some tough questions. What is Australia doing in Afghanistan? What would winning that war look like? What makes a man leave his family to go to war when he doesn't have to? Can there be such a thing as a just war?

Nathan Mullins isn't a typical Special Forces soldier. In his day job he is the International Program Manager for Australian Aid International, a humanitarian organisation that responds to disasters and emergencies around the globe.
More books by this author

Nathan Mullins describes himself as just an ordinary guy with a wife, a mortgage and three kids. But he does admit he's had more than his fair share of exceptional experiences. He an ex-cop, ex-soldier with the Army Reserve special services and ex-security consultant in Iraq. He's also a volunteer with Australian Aid International and a corporate motivational speaker, working mostly with groups of men. He still does AAI work when he gets the call up. He lives in Melbourne.