How I Survived 71 Days Lost in a Desert Hell 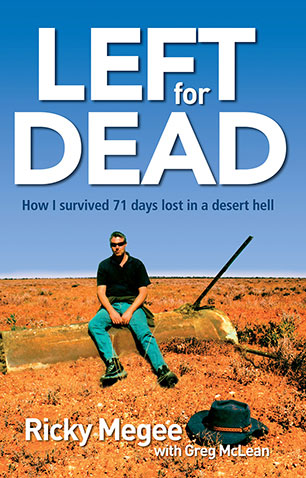 Gripping and inspiring story of how one man endured almost three months alone in the desert living on nothing but insects and frogs. An extraordinary story of survival in the outback.

'No shoes, no vehicle, no food, no water and no idea. I'd always been one of those blokes who ragged on people who found themselves lost in the desert. Now I was one of those people. It was harsh, desolate country for a man all alone in bare feet. Nevertheless, I started to walk. And walk. The more I walked, I figured, the less distance I'd have to travel to get found. It was faulty logic, but it was the best I could come up with.'

In April 2006 the news broke of an amazing feat of survival by a white man in one of the most inhospitable areas of Australia. Ricky Megee was found sheltering by a dam on a remote cattle property in the Northern Territory.

After being abducted on the Buntine Highway then left for dead, Ricky had walked for ten days in bare feet through unforgiving terrain in blistering heat. Stumbling upon a dam, he set up camp there and survived for almost three months on leeches, grasshoppers, frogs and plants, losing 60 kilograms in the process.

In Left for Dead, Ricky Megee gives a full and frank account of his abduction, survival and extraordinary rescue. Vividly told, it's a gripping and yet inspiring story of how one man endures a terrible ordeal and lives to tell the tale.
More books by this author

Ricky Megee has settled in Dubai with his partner, Katie. No longer the guy who survived 71 days eating frogs and lizards, Ricky is managing a construction team on one of the world's new industrial frontiers. While still surviving in a desert of sorts, Ricky is enjoying the opportunity to be recognised for what he does and not who he is.

Greg McLean literally fell into journalism twelve years ago. Since then his career has taken him from Turkey to Tasmania and many interesting places in between. He now lives in Darwin with his partner, Bec, and spends his time mucking around with film and television projects and enjoying a quiet beer with friends and strangers.