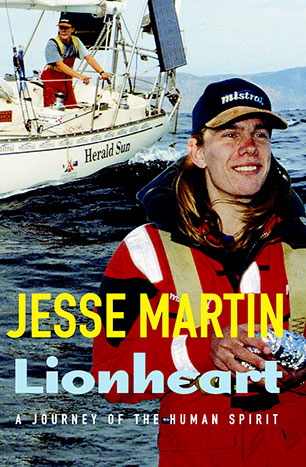 The story of Jesse Martin who, at the age of 18, was the youngest person to sail solo and unassisted around the world. A young man who didn't know the meaning of impossible.

'Your courage and determination are an inspirational example for all young people to follow.' Bill Clinton, former president of the United States

'What you have done makes me proud to be a human being.' Ben Harper, musician

'I was a member of a large community at the start who thought he was mad. I take my hat off to him.' David Adam, international yachtsman

On 31 October 1999, at the age of just eighteen, Jesse Martin sailed into the record books in his yacht Lionheart, by becoming the youngest person ever to sail solo, non-stop and unassisted around the world.

Jesse Martin was born for adventure. After learning to sail at fourteen, he travelled along Australia's tropical coast on a flimsy catamaran, and by sixteen he had kayaked through the remote islands of Papua New Guinea an crewed on a yacht sailing from Belize to Tahiti. But the biggest adventure of them all was yet to come.

Lionheart is Jesse's story. A story of courage, loneliness and danger, it is also an incredible, gripping, true-life adventure.
More books by this author

Jesse Martin was destined for adventure. Born in Munich in 1981 whilst his parents were travelling through Europe in a kombi van, he spent his early years in the beautiful Daintree Rainforest of North Queensland. By the time he was 14 he had sailed a thousand kilometres along Australia's tropical coast on a flimsy catamaran and had trekked through south-east Asia and the Aboriginal communities of Central Australia. At 16 he kayaked through remote islands of Papau New Guinea and then crewed on a yacht that sailed from the Central American country of Belize to Tahiti. In 1998 at the age of 17, Jesse set off from Melbourne on a solo sail around the world. The rest is history.