On Leopard Rock: A Life of Adventures 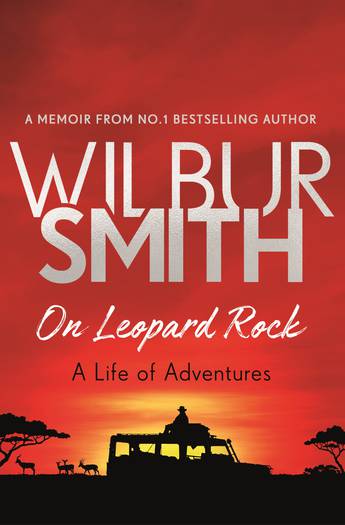 Wilbur Smith has lived an incredible life of adventure, and here in his first ever memoirs he shares the extraordinary true stories that have inspired his fiction.

I've been writing novels for over fifty years. I was lucky enough to miss the big wars and not get shot, but lucky enough to grow up among the heroes who had served in them and learn from their example. I have lucked into things continuously. I have done things which have seemed appalling at the time, disastrous even, but out of them has come another story or a deeper knowledge of human character and the ability to express myself better on paper and write books which people enjoy reading.

Along the way, I have lived a life that I could never have imagined. I have been privileged to meet people from all corners of the globe, I have been wherever my heart has desired and in the process my books have taken readers to many, many places. I always say I've started wars, I've burned down cities and I've killed hundreds of thousands of people - but only in my imagination!

From being attacked by lions to close encounters with deadly reef sharks, from getting lost in the African bush without water to crawling the precarious tunnels of gold mines, from marlin fishing with Lee Marvin to near death from crash-landing a Cessna aeroplane, from brutal school days to redemption through writing and falling in love, Wilbur Smith tells us the intimate stories of his life that have been the raw material for his fiction. Always candid, sometimes hilarious and never less than thrillingly entertaining, On Leopard Rock is testament to a writer whose life is as rich and eventful as his novels are compellingly unputdownable.
More books by this author

Wilbur Smith is a worldwide phenomenon. His readership has built up over fifty-five years of writing. Born in Central Africa in 1933, Wilbur became a full-time writer in 1964 following the success of When the Lion Feeds, and has since published forty-one global bestsellers, including the Courtney Series, the Ballantyne Series, the Egyptian Series, the Hector Cross Series and many successful standalone novels, all meticulously researched on his numerous expeditions worldwide. The establishment of the Wilbur & Niso Smith Foundation in 2015 cemented Wilbur's passion for empowering writers, promoting literacy and advancing adventure writing as a genre. The foundation's flagship programme is the Wilbur Smith Adventure Writing Prize. For all the latest information on Wilbur visit www.wilbursmithbooks.com or facebook.com/WilburSmith