My years as a teenage Islamo-fascist 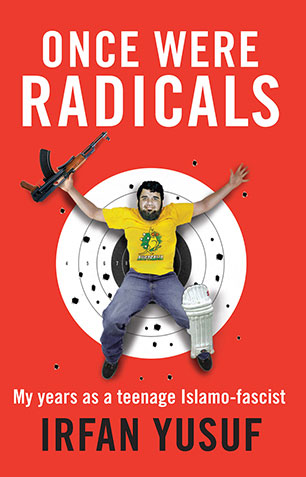 Why did a nice middle class Australian Muslim boy want to become a soldier for Islam? Irfan Yusuf tells his hilarious, irreverent story of growing up Muslim in the suburbs.

'My name is Irfan Yusuf, so anything I do will, naturally, be presumed to be some kind of deception or cover. I am part of some giant conspiracy to destroy the West, one of Osama bin Ladin's henchmen. I am part of the Muslim Question.'

What happens when a nice Muslim Australian boy considers joining the jihad in Afghanistan? Irfan Yusuf grew up in John Winston Howard's electorate in the leafy suburbs of Sydney. He should have been thinking about girls and cars, but instead became convinced he should die for a Muslim cause. And in the process he discovered he couldn't learn the Koran from boofy-headed blokes brandishing sticks, and he couldn't quite stomach extra-halal meat killed on an uncle's farm. Once Were Radicals is a hilarious, irreverent memoir of cultural confusions, community politics and outright mischief making - with a deeper message.

'Once Were Radicals is laugh-out-loud funny, enlightening and refreshingly honest' - Randa Abdel-Fattah, author of Does My Head Look Big in This?

'Finally a book that unearths the horror of Australian Muslim extremism - that it's really, really not that scary.' - Nazeem Hussein, comedian on Comedy Channel's 'Balls of Steel'
More books by this author

Irfan Yusuf is a lawyer and freelance commentator who regularly writes for newspapers and online media on issues relating to Muslim communities and cultures.

Winner of the 2007 Iremonger Award for Writing on Public Issues

6 The Islamic industry and the Holy Trinity

9 Becoming and unbecoming a hijab messenger