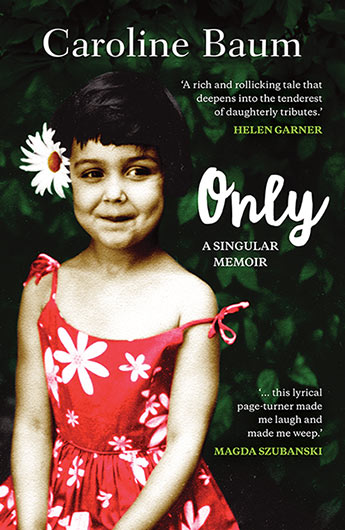 Caroline Baum's fascinating and moving memoir about being an only child in a very unusual family.

Three barely felt like a family. It felt like it did not count. Like we were unfinished. Incomplete. There was always a gap at the table, room to set places for others. Visitors were few and far between. Mostly, there was only me.

Only is a memoir of an unconventional childhood that explores what it means to be an Only Child -- as both child and adult. Also what it means to be the daughter of two people damaged by trauma and tragedy, particularly a domineering and explosive father. Secrets are revealed and differences settled.

Caroline Baum's moving and gripping memoir is for everyone who has felt they are the fulcrum of a seesaw, the focus of all eyes and expectations, torn between love and fear, obedience and rebellion, duty and the longing to escape.It is also for anyone who has felt the burden of trying to be a Good Daughter -- what that means and why it is so hard. Revelatory, lyrical and unflinching.


'With a glamorous mother and a successful father, Caroline Baum's prosperous childhood seems like the epitome of privilege. Yet below the shimmering surface, rolling currents from scarred pasts buffet her girlhood, creating dislocations that resonate into adulthood. This beautifully rendered, searingly honest account becomes, in the end, a testimony to the enduring power of love, no matter how imperfectly enacted or expressed.' GERALDINE BROOKS, author of The Secret Chord

'A rich and rollicking tale that deepens into the tenderest of daughterly tributes.' HELEN GARNER, author of This House of Grief

'A conflicted love letter to her European origins and the uncrushable spirit of her glamorous, at times difficult parents, this lyrical page turner made me laugh and made me weep.' MAGDA SZUBANSKI, author of Reckoning

'An unflinchingly honest exploration of what it takes to be a good daughter, with a heart-melting scoop of ice cream.' ELIZABETH GILBERT, author of Eat, Pray, Love

'A vivid and moving account of life as an only child: there's glamour in this world but terrors aplenty.' RICHARD GLOVER, author of Flesh Wounds

'Only is a wild and deeply felt tale. With her unflinching gaze, Caroline Baum explores the inheritance of being an "only", contrasting an exotic cast of the glamorous and the famous with her unconventional, often solitary childhood.' AILSA PIPER, author of Sinning Across Spain

Caroline Baum has had a distinguished career in arts journalism and broadcasting working for the BBC, ABC radio and television, Vogue magazine (in the UK and Australia), and as founding editor of Good Reading magazine. She is a regular contributor to national media and her writing has appeared in two anthologies: My Mother, My Father and Rebellious Daughters. In 2015 she was awarded the Hazel Rowley Fellowship and is currently working on a biography. She lives on the south coast of New South Wales.