Secrets and clues from a life lost in words 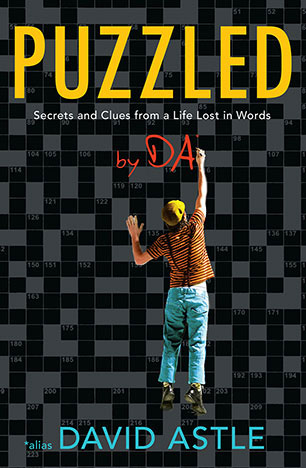 From teenage word-nerd to Australia's pre-eminent (and most fiendish) puzzle-maker, Puzzled is a memoir of a life lost in words as well as a revealing guide to the deepest mysteries of crossword and other word puzzles.

'I used to regret not being born Catholic because it meant I'd been denied the joys of self-flagellation. Then I discovered DA and he solved my problem.' - Bill Leak, cartoonist, and anagram of Killable

Many a puzzle solver has battled against the devilish mind of long-time crossword maker and wordaholic David Astle, known to many as DA.

In Puzzled he holds out a helping hand to the lost and perplexed taking us on a personal tour into the secret life of words. Clue by clue, chapter by chapter, we step through a central puzzle, uncovering and unravelling word-secrets as we go. The Steve Irwin Fluke, the Swastika Accident, the Abracadabra Pyramid - hidden meanings, anagrams, reversals - all the Dark Arts are finally revealed.

More than a how-to manual, more than a memoir, Puzzled enlightens us about cryptics and delights in the quirky realm of wordplay. It is a book for word junkies everywhere.
More books by this author

David Astle has written two novels, Marzipan Plan and Book of Miles, plus two non-fiction works: One Down, One Missing and Offbeat Australia. Between books, he drives the world to delight and despair as Friday's crossword setter, DA, appearing in both The Sydney Morning Herald and The Age. Actor Geoffrey Rush, in fact, describes David as 'the Sergeant Pepper of cryptic crosswords - a complete mind fuck.' Which is possibly a compliment. As a feature writer, David has investigated luck, lying and fridge magnets, plus a hundred different topics for various magazines. He also reviews books for Radio National. David's short plays have been performed in both Sydney and Melbourne, while his short stories have won awards, including a trip to Beijing via Dublin as part of the James Joyce Suspended Sentence Prize in 2001. He is currently Mr Dictionary on the SBS game show, Letters + Numbers.