The Boy Who Wouldn't Die 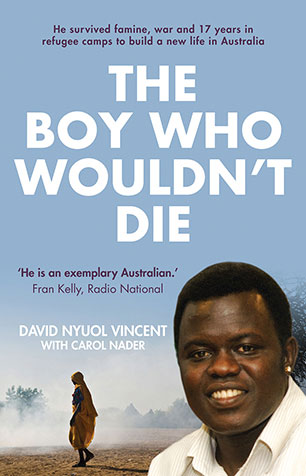 The inspiring true story of David Nyuol Vincent, a Sudanese refugee who survived famine, wars and 17 years in refugee camps to build a new life in Australia.

David Nyuol Vincent was a little boy when he fled southern Sudan with his father, as war raged in their country. He left behind his distraught mother and sisters, his village and his childhood.

For months David and his father walked across southern Sudan, barefoot, desperately searching for safety, food and water. They survived the perilous Sahara Desert crossing into Ethiopia only to be separated. David was taken in and trained as a child soldier, surviving the next 17 years of his life alone in refugee camps. Life was a relentless struggle against starvation, air bombings and people determined to kill him and his people.

In 2004 David was offered a humanitarian visa as one of the Lost Boys of Sudan and was resettled to Australia. Traumatised by what he had seen and endured, he went about the slow and painful process of making a new life for himself-a life away from hunger, away from guns, away from death. A life where David is determined to improve the plight of his people both here in Australia and back in South Sudan.

Told with frankness and humour, this is the powerful account of a young man's resilience. The story of a boy who refused to die.
More books by this author

David Nyuol Vincent is one of the Lost Boys of Sudan. He was trained as a child soldier in Ethiopia and lived as a refugee in Kenya until he was twenty-six. Since rebuilding his life here in Australia, David has become an advocate for refugees and the Sudanese community and he is a Victorian Human Rights Youth Ambassador and a People of Australia Ambassador. He also helped to set up an all-Sudanese refugee football team, the Western Tigers, in the Brimbank soccer league. David is a true humanitarian and is committed to achieving peace for his people in Sudan.

Carol Nader is an award-winning journalist who worked for The Age for fifteen years. She is a former health editor and social policy editor and has written extensively on child protection and family law, race and ethnic affairs, the health system, abortion law reform, IVF laws, gay rights, mental health and medical research. She has been honoured in awards from the Victorian Law Foundation, Research Australia and the National Press Club.