The Dust of Uruzgan 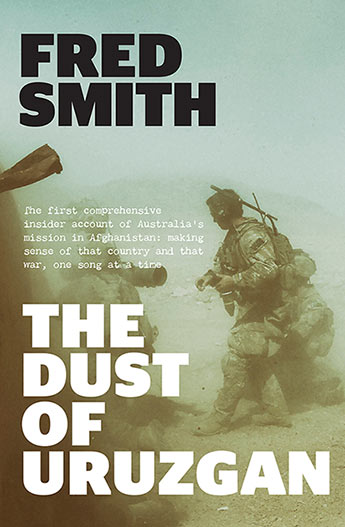 Fred Smith has been described as 'Australia's secret weapon' in international diplomacy. As a career diplomat, he served for two years in southern Afghanistan. Working alongside Australian soldiers in Uruzgan Province, Fred's second career as a musician came to the fore, his guitar serving as a bridge not only to the troops, but also to the people and tribal leaders of that war-torn region. His song, 'Dust of Uruzgan', captured the hearts of many serving in Afghanistan, and 'Sapper's Lullaby' has become an anthem for soldiers and their families. His acclaimed album, Dust of Uruzgan, earned him comparisons to Eric Bogle, John Schumann and Don Walker.

Now, with Australian forces out of Uruzgan, this gripping book is the first comprehensive on-the-ground account of Australia's involvement there. Part memoir, part history, part eyewitness reportage, it offers a sympathetic explanation of an obscure and impoverished province where tribal leaders conspire against one another in a society devastated by 35 years of warfare. With remarkable insight and humour, The Dust of Uruzgan recounts the setbacks and successes of a contingent of Australian soldiers, diplomats and aid workers struggling to make a difference in a place where truth and clarity were often buried, and where too many young Australians perished in the dust of Uruzgan.

'I think a real strength of Fred's music and the way he writes his songs is that he's actually experienced a lot of what he's writing about. He's actually walked in the same footsteps of those soldiers he's writing about . . . He ate, he slept, he bathed, he worked, he lived with them and when soldiers died, he mourned with them.' COLONEL JASON BLAIN, quoted on Australian Story

Over the last 15 years Fred Smith has emerged as one of Australia's most interesting songwriters. He has spent the last 15 years all over the joint: working on peace keeping missions in Afghanistan and the South Pacific, touring in America and travelling the Australian festival circuit.

He is the subject of the film Bougainville Sky about his time in the war-torn islands of the South Pacific where his work as a musician and radio broadcaster contributed to the success of the world's first unarmed peace keeping force.

Fred was the first Australian diplomat to be posted to Uruzgan in July of 2009. He wrote a powerful collection of songs about the realities of life for soldiers and civilians in this difficult war, recently released on a high acclaimed album called Dust of Uruzgan.

He has put out about eight CDs, two of which won National Film and Sound Archives Awards. Some of these were joint efforts with Liz Frencham and the Spooky Men's Chorale.