Francis and the making of a radical pope 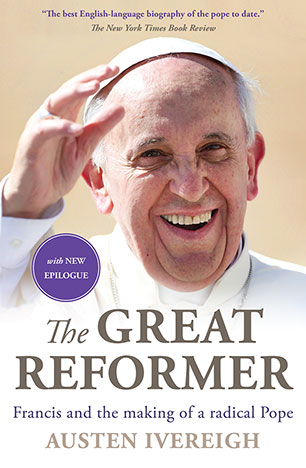 The most authoritative biography of Pope Francis traces the life of this revolutionary thinker from his childhood in Argentina to the highly regarded world leader he is today. It identifies the pope's innovative vision for the Church, and the obstacles he faces in an institution still strongly defined by its conservative past.

Pope Francis is the most talked-about and most revolutionary pope in living memory. With his rejection of papal pomp, focus on the poor, and fearless critiques of injustice and corruption, he has captivated the world.

The Great Reformer is an intimate, in-depth biography of Pope Francis. Drawing on extensive interviews in Argentina and other countries, it traces the roots of his papacy in his childhood in Buenos Aires, in his Jesuit training, and in the dramatic events during the Peron era and the military government in Argentina in the 1970s. It shows how these experiences have shaped his beliefs, and enabled him to challenge and redirect the Church.

Pope Francis was elected in the midst of one of the biggest crises in the Church in modern times. This is the story of a true radical who is transforming the Church by restoring what it has lost.

'This is a great read about a man who's exploded into our consciousness, whom we're yet to really know but whom we sense may offer precious revitalisation for our bruised Church.' - Geraldine Doogue

Austen Ivereigh is a British writer, journalist, and commentator on religious and political affairs who holds a doctorate from Oxford University. His work appears regularly in the Jesuit magazine America and in many other periodicals. He is well known on British media, especially on the BBC, Sky, ITV and Al Jazeera, as a Catholic commentator.