There's a Bear in There

(and he wants Swedish) 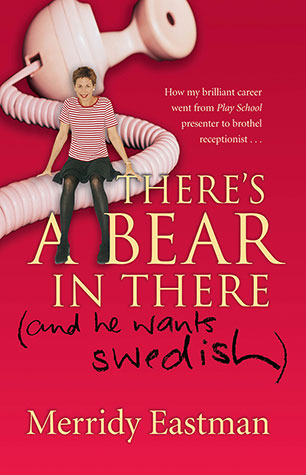 This behind-the-scenes look at life in a brothel is a wonderfully funny tale, told with a lively sense of the absurd and a rare and forgiving understanding of human frailty.

When her acting career stalls, Merridy Eastman lands a challenging role: night receptionist at a Sydney brothel. A long way from the bright lights of a TV studio, she is swept into the high drama of the sex industry.

This former Play School presenter learns words for items and acts she never imagined, she opens the door to first-timers, old hands, couples and the occasional celebrity. But the place she spends every moment she can is the kitchen table, having a cup of tea and discussing investment portfolios, and life's many great mysteries, with Sapphire, Shelby, Antoinette and Bree - the women who make a living from having sex with strangers. And then, in this most unlikely of places, she finds herself falling in love . . .

There's a Bear in There (and he wants Swedish) is a funny, fascinating and near-as-dammit true account of a forbidden world, told with a lively sense of the absurd and a rare and forgiving understanding of human frailty.
More books by this author

A NIDA graduate, Merridy Eastman has performed in a swag of productions for the Melbourne and Sydney Theatre Companies and spent several summers leaping about botanical gardens across Australia, bringing Shakespeare to the masses. She has had major roles in most current soap operas, playing everything from a cradle-snatching golf fanatic on Neighbours to an unstable funeral director on Blue Heelers who was so unhappy with a bad haircut, she stabbed the hairdresser with his scissors. She currently plays the neurotic Eileen Unn on Channel Seven's Always Greener (screening from July this year). But despite this varied and illustrious career, Merridy has come to accept that for generations of kiddies she will always be Merridy-from-Play School thanks to a five-year stint on the show in the 1980s.