To Begin To Know

Walking in the shadows of my father 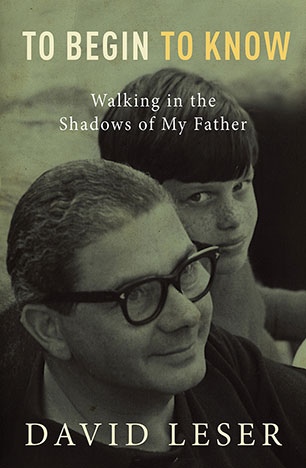 A deeply moving and searingly honest memoir about fathers and sons.

Wasn't that the whole point of being alive? . To ask the right questions, not just as a journalist but as a human being? To not just examine other people's dark, cold, self-hating, contradictory, disconnected places, but to examine one's own, given that this was possibly the most uncomfortable inquiry one could ever undertake? . not to rush to one position or another, but to allow disparate ideas to co-exist, within ourselves and within others. To begin to know oneself, and to begin to know that we don't know.

More than a decade ago, journalist David Leser started writing a biography of his famous father, legendary magazine publisher, Bernard Leser. But David couldn't finish the project because he didn't want to employ his investigative and forensic feature writer's skills to unmask his father - to do so seemed utterly at odds with his desire to be the loving son he wanted to be. But freed from the obligation of having to think of his father as a book project, David started seeing him as a man, as both a son and a father, as someone loved and familiar but also flawed and unknowable. And the harder he looked at his father, the more he saw himself and how his own life had been lived both in tribute to and rebellion from the legacy of his father.

A lyrical, deeply moving and searingly honest memoir of two men, father and son, and their shared truths and burdens, To Begin to Know is a story of love and forgiveness, of acceptance and hope. It goes to the heart of a family - the hearts of all families - and asks questions crucial to us all.
More books by this author

David Leser has been a Middle East and Washington D. C. correspondent as well as feature writer in Australia for the Murdoch, Packer and Fairfax presses. He's more recently gained a reputation as a brilliant profile writer; among his subjects are Alan Jones, Dame Edna Everage, Helen Garner, Margaret Whitlam, Oriana Fallaci, the Dalai Lama and Xena, Warrior Princess. The recipient of a number of awards, David has worked as a staff feature writer for the Daily Telegraph, The Australian, HQ, The Bulletin, The Sydney Morning Herald, Good Weekend and the Australian Women's Weekly.