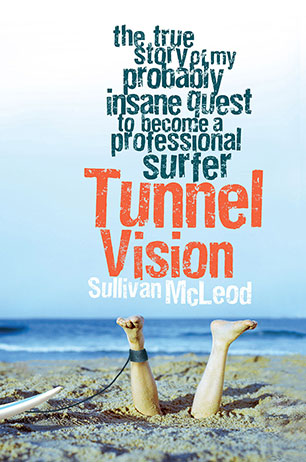 The highly entertaining true story of a bloke who decides to make his favourite pastime (surfing) his profession for a year.

It started as a joke and then got serious. Sort of.

Inveterate traveller Sullivan McLeod got sick of people asking him what he was doing with his life so he started to say he'd decided to become a professional surfer. Then somehow he was registered in the World Qualifying Series (WQS) and found he was going ahead with his stupid idea. He could surf a bit - after all, he did grow up in Margaret River.

So, despite the fact that he was unfit physically, financially and possibly mentally, Sullivan goes into training for his nine months on the circuit, with frequent sidetracking into drinking and partying, but he does actually make it to most of the heats. Along the way he has to work out how to get to the next competition in the next country on his very tight budget, and he shares his highly entertaining observations about Americans, Brazilians, the Brits, French and ex-pat Australians, to name but a few. And he has his fair share of mishaps: he gets locked up in a Brazilian holding cell, parties with South American criminals, has everything stolen in France, and still manages to catch the wave of a lifetime. It's more about the journey than the surfing. We meet the surfers who desperately want to succeed, and all the bit players who make the comps happen, but if Will Swanton's Some Day is as close as you can get without pulling on a contest singlet yourself, Tunnel Vision is about pulling on the singlet, for one hell-raising adventure after another.
More books by this author

Sullivan McLeod grew up with three brothers in Margaret River and still lives there (often in a tree house) when he's not travelling. He performed around the world as a stand-up comedian for seven years with gigs at Melbourne Comedy Festival, Edinburgh Festival, London Comedy Store, Improv Comedy Club (LA) and The Comedy Store (LA). Apart from being a restless vagabond, he has been a door-to-door salesman for a telecommunication company (Sydney), a spy for a Greek Restaurant (Rhodes), an assistant to a professor to check the originality of ideas (European Patent Office, Holland), a canvasser for dodgy solicitors to see if anyone wanted to sue their landlord (London), an audience member paid to laugh at lame jokes for live TV shows (Hollywood), a driver of a drilling rig without a truck driver's licence (Kalgoorlie), and a stooge for a magician in his street show in London. And he's been a professional surfer for nine months.