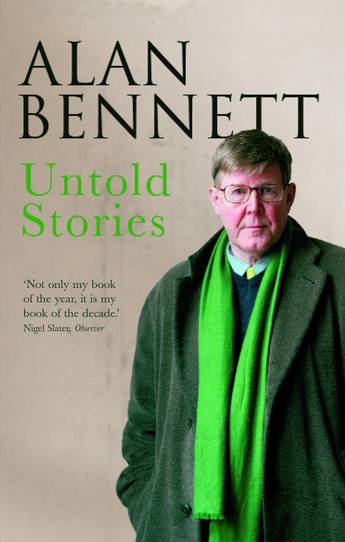 The paperback of Untold Stories contains new unpublished diaries, as well as a poignant memoir of his family and of growing up in Leeds, together with his much celebrated diary for the years 1996-2004, and numerous other exceptional essays, reviews and comic pieces.

Since the success of Beyond the Fringe in the 1960s Alan Bennett has delighted audiences worldwide with his gentle humour and wry observations about life. His many works include Forty Years On, The Lady in the Van, Talking Heads, A Question of Attribution and The Madness of George III. Bennett's most recent play, The History Boys, opened to great acclaim at the National in 2004, and is winner of the Evening Standard Award, the South Bank Award and the Critics' Circle Award for Best New Play. It came to Sydney in March 2006 and was made into a feature film
More books by this author

Alan Bennett has been one of our leading dramatists since the success of Beyond the Fringe in the 1960s. His television series Talking Heads has become a modern-day classic, as have many of his works for stage including Forty Years On, The Lady in the Van, A Question of Attribution, The Madness of George III (together with the Oscar-nominated screenplay The Madness of King George), and an adaptation of Kenneth Grahame's The Wind in the Willows. At the National Theatre, London, The History Boys won numerous awards including Evening Standard and Critics' Circle awards for Best Play, an Olivier for Best New Play and the South Bank Award. On Broadway, The History Boys won five New York Drama Desk Awards, four Outer Critcs' Circle Awards, a New York Drama Critics' Award, a New York Drama League Award and six Tony's. The Habit of Art opened at the National in 2009. His collection of prose, Untold Stories, won the PEN/Ackerley Prize for autobiography, 2006. The Uncommon Reader was published in 2007 and Smut in 2011. The film of The Lady in the Van, starring Maggie Smith, was released in 2015 with the tie-in edition spending several weeks on bestseller lists.