When We Were Young and Foolish

A memoir of my misguided youth with Tony Abbott, Bob Carr, Malcolm Turnbull & other reprobates 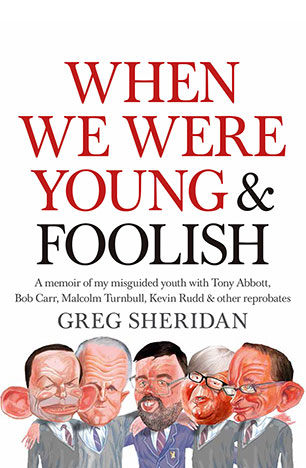 An extraordinary look at the formative years of some of our most prominent and influential politicians.

By chance, Greg Sheridan's early life saw him become intimate friends and colleagues with a fascinating list of people who now make up Australia's political leadership. At university Tony Abbott was his best friend; he became close to Peter Costello as well as Labor figures Michael Danby and Michael Easson. As a young journalist on The Bulletin he became friends and colleagues with Bob Carr and Malcolm Turnbull. When he first joined The Australian he was posted to China, there to befriend another future leader, Kevin Rudd.

When We Were Young and Foolish traces Greg's determined and passionate journey from an underprivileged but emotionally rich childhood in Sydney's inner west, to a world of clashing political fronts. From Greg's early years at a seminary, through political stoushes at university, the surprising period as a union organiser and heady intellectual times at The Bulletin, he also illuminates the formative years and experiences of his friends who would who go on to be prime ministers, premiers and senior cabinet ministers. It offers new and personal insights into the people they were as students and twenty-somethings, and the events, philosophies, demons and relationships that helped make them the people they are.
More books by this author

Greg Sheridan is Foreign Editor of The Australian, and a highly regarded journalist. He is active across radio and television, as well as print.