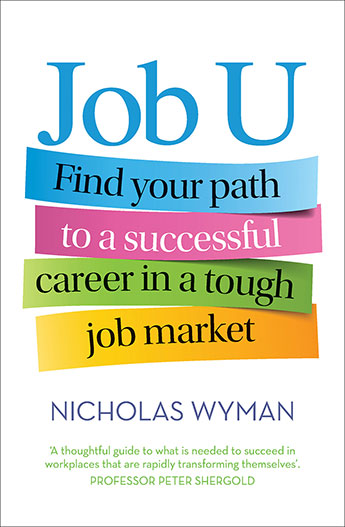 Companies often struggle to find people with the skills to do the work they need. Nicholas Wyman shows that rewarding jobs are available if you look outside the traditional classroom.

Some of the best jobs don't require a university degree.

Companies often struggle to find employees with the right skills.

Even though unemployment is high and you may be struggling to get an interview, the good news is that there are still opportunities for a rewarding and well- paid career. These opportunities can't be found inside a traditional classroom, but rather in the educational options that provide the technical, vocational and soft skills that companies actually need. These include professional certifications, associate degrees, apprenticeships, and occupational learning.

In Job U Australian workforce skills expert Nicholas Wyman shows how to find these non-traditional pathways and get your dream job. Along the way you'll meet people of all ages who have done just that: from an emergency air paramedic, to a lead racing car mechanic, to a celebrity chef.

If you are considering tertiary education, or if you are looking for a new career, Job U is your ticket to a secure and prosperous future.

'A thoughtful guide to what is needed to succeed in workplaces that are rapidly transforming themselves.' - Professor Peter Shergold

'Job U should be required reading for those wanting to know where and how to acquire the in-depth knowledge and real-world skills needed not just to land a well-paying job but to progress up the ladder toward a well-paying career.' - Stanley S. Litow, Vice President of Corporate Citizenship & Corporate Affairs, IBM

NICHOLAS WYMAN is a workforce development and skills expert, CEO of the Institute for Workplace Skills and Innovation and a multi-award winning author.

He was Australian Apprentice of the Year in 1988 and went on to captain Australia's gold medal-winning Culinary Youth Team. Today, he is a leader in developing skills-building, mentorship and apprenticeship programs that close the gap between education and careers around the world.

He is a regular contributor to Forbes Magazine, and also writes for Huffington Post and CNBC. He has an MBA and has studied at Harvard Business School and the Kennedy School of Government and was awarded a Churchill Fellowship in 2012. He regularly speaks at conferences and to HR departments, trade associations, think tanks, high schools and colleges in Australia, North America, Europe, Singapore and China.

1. People without jobs and jobs without people

4. The power of diplomas

5. The magic of apprenticeships

Job U by Nicholas Wyman (Extract)

Hardly a week passes without concern being raised in the public square of difficulties many young people have in finding stable and fulfilling employment. Nicholas Wyman, CEO of the Institute for Workplace Skills and Innovation, contends that many current approaches to preparing young people for the workforce are misdirected. Wyman notes that in many sectors young people are encouraged to undertake university courses, and they are led to believe that they have somehow failed to succeed if they choose alternative educational and career pathways. The result is that many people who complete university struggle to find employment that is commensurate with their qualifications, as they are deemed to be ‘overqualified’; they either struggle to find suitable employment, or are employed in jobs that do not require the level of qualifications they have gained. Such people have often acquired considerable debts in financing their degree courses, which in some instances they take years to pay off.

By contrast, Wyman notes that there are many jobs, typically those requiring trade and/TAFE qualifications, that have a shortage of employees either with the correct qualifications, and/or job ready skills. Wyman notes that one of the benefits of completing an apprenticeship is that a person not only finishes their course debt free, but is also paid a wage whilst doing so, and is mentored closely during the course of training.

Wyman also calls for a re-think in secondary education, advocating the introduction of more skills-based courses as elements of the secondary curriculum, citing overseas examples of schools which have produced disproportionate numbers of students who have successfully pursued careers in zones noted for high levels of youth unemployment.

Zone U makes for interesting reading, particularly in the light of current educational debates. Whilst Wyman puts up a cogent case for a broader range of educational pathways, much of the book is repetitive; this is despite the insertion of some interesting and detailed case studies. Nevertheless, the ideas contained therein demand serious consideration. This work would be particularly useful for careers’ counselors and other senior teachers assisting with students exploring and considering a range of pathways.
Michael E Daniel, Camberwell Grammar School, VIC