Who Poisoned Your Bacon?

The Dangerous History of Meat Additives 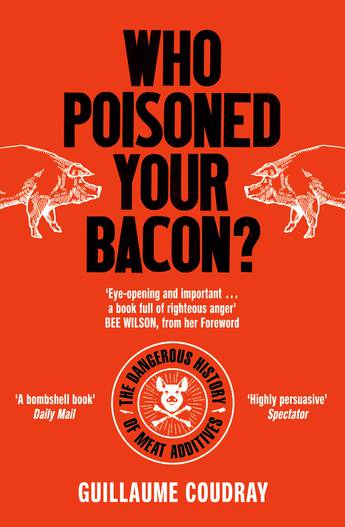 'Highly persuasive ... a well-organised and solid dossier that alerts us to legalised chemical trickery.' - The Spectator
'A bombshell book' - Daily Mail
'Eye-opening and important . . . a book full of righteous anger' - Bee Wilson

Did you know that bacon, ham, hot dogs and salami are classified by the World Health Organization (WHO) as 'category 1 carcinogens'?

Would you eat them if you knew they caused bowel cancer?

Following ten years of detailed investigation, documentary film-maker Guillaume Coudray presents a powerful examination of the use of nitro-additives in meat. As he reveals, most mass-produced processed meats, and now even many 'artisanal' products, contain chemicals that react with meat to form cancer-causing compounds. He tells the full story of how, since the 1970s, the meat-processing industry has denied the health risks because these additives make curing cheaper and quicker, extending shelf life and giving meat a pleasing pink colour.

These additives are, in fact, unnecessary. Parma ham has not contained them for nearly 30 years - and indeed all traditional cured meats were once produced without nitrate and nitrite. Progressive producers are now increasingly following that example.

Who Poisoned Your Bacon? - featuring a foreword by acclaimed food writer Bee Wilson -is the authoritative, gripping and scandalous story of big business flying in the face of scientific health warnings. It allows you to evaluate the risks, and carries a message of hope that things can change.
More books by this author

Guillaume Coudray is a French director and producer of documentary films. A political scientist by training, he is a graduate of Sciences Po and a former research grantee at the National Foundation for Political Science. His decade-long investigation into meat processing has led to widespread press coverage and a hard-hitting film documentary broadcast in more than fifteen countries, which has had a major impact on the meat processing industry. He lives in Paris. Follow him on twitter at @g_coudray