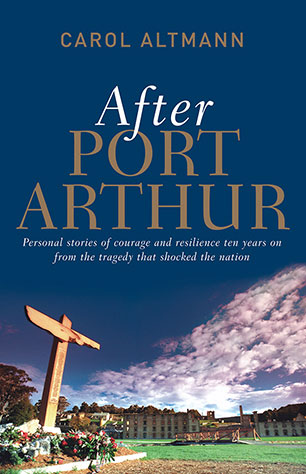 A decade on, journalist Carol Altmann looks at how the people, the place, the killer, and the whole country has changed since the horrific massacre at one of Australia's most infamous historic landmarks.

When the gunshots started no one could quite believe it. A beautiful day. A tranquil setting despite its grim past. It was 28 April 1996, the day of the worst civilian massacre in history. The day 35 innocent people were murdered at Port Arthur.

All Australians reeled in shock at the news. But what happens to those involved once the headlines have faded and the TV cameras have been switched off? For those who had witnessed the horror or lost loved ones, their lives had been changed irrevocably. Learning to cope with such an experience is a life-long process.

Through very personal stories, After Port Arthur documents the profound effects the event has had on the people involved. Their ongoing search to find strength in such tragedy is testament to the greater human spirit.
More books by this author

Carol Altmann has been a journalist for fifteen years and has a Master of Journalism degree. She began her career working for Messenger newspapers where she became Chief-of-Staff and was State Political Reporter for the Adelaide Advertiser until 1997. In 2000 she became Adelaide Bureau Chief for The Australian and in 2002 transferred to Tasmania where she was Hobart Bureau Chief. She now lives in South Australia.

2 Shades of Blue: Walter and Keith

5 The Truth is out There: Wendy Scurr

6 Behind the Lens: Leigh Winburn

8 The Mayor of Tasmania: Neil Noye

9 The Frontline: The Dells

Those who died in the Port Arthur Massacre