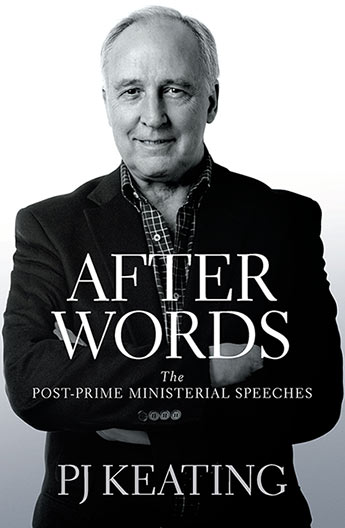 Books of speeches are rarely published as a compendium of work by one person. After Words is unique in Australian publishing by virtue of its scale and range of subjects, and that all the speeches are the work of one eye and one mind: former Prime Minister Paul Keating.

Each speech has been conceptualised, contextualised and crafted by Paul Keating. Subject to subject, idea to idea, the speeches are related in a wider construct, which is the way Paul Keating has viewed and thought about the world.

The speeches reveal the breadth and depth of his interests - be they cultural, historical, or policy-focused - dealing with subjects as broad as international relations, economic policy and politics. Individual chapters range from a discussion of Jorn Utzon's Opera House through to the redesign of Berlin, the history of native title, the challenge of Asia, the role of the monarchy, to the shape of Gustav Mahler's Symphony No. 2, and more.

After Words contains an analytic commentary on Australia's recent social and economic repositioning, in the minds of many, by its principal architect. The speeches, more often than not, go beyond observations, as Paul Keating sketches out new vistas and points to new directions.

For those interested in matters that go to the future of Australia and the world, After Words presents, unmediated, a panoply of issues which the policy mind and writing style of Paul Keating has sculpted into a recognisable landscape.
More books by this author

Paul Keating was Australia's Treasurer (1983-91) and Prime Minister (1991-96). He championed a clutch of seminal changes to the country, including the reorientation of Australia's strategic and trade relationships with Asia, promoting Australia's shift to a republic and the development of a major legal structure to return lands to Australia's indigenous people. His domestic economic reforms included the dismantling of a centralised wage fixing system in favour of an enterprise bargaining model, floating the Australian dollar, establishing universal superannuation and setting up a competition policy to lower prices, with the aim of lifting disposable incomes. His reforms underpinned twenty years of low inflationary economic growth.

Paul Keating maintains his interest in politics, economics and foreign policy and contributes occasionally to the public debate. He is committed to aesthetic interests in architecture, the decorative arts and the romantic repertoire in classical music.