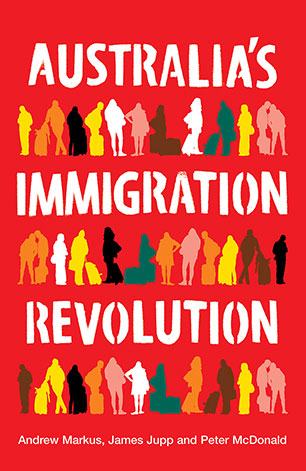 How well is Australia handling immigration at a time of increased international and ethnic tensions? Australia's Immigration Revolution examines the social impact of the huge increase in Australia's immigration program over the past decade.

In 2006 Australia's population was 20.7 million. It is projected to reach 23 million in 2014. What is driving this rapid population growth, and how is the Rudd government dealing with immigration at a time of recession?

The diversification of the immigration intake over the last 50 years, from the British Isles to Europe and Asia, is widely recognised. But there is less understanding of the development of Australia's temporary program, which since 2000 is the major component of the immigration intake. Similarly, the development of the global labour market and the impact of this on immigrants have not entered Australian consciousness. The lack of attention to these developments stands in marked contrast to the heated controversies sparked by the arrival by boat of small numbers of asylum seekers.

James Jupp AM is editor of Australian People: An Encyclopedia of the Nation, its People and their Origins. He is the Director of the Centre for Immigration and Multicultural Studies at the Australian National University.

Introduction: Immigration and the recession

3 Immigration and the nation state

6 The politics of immigration, settlement and multiculturalism