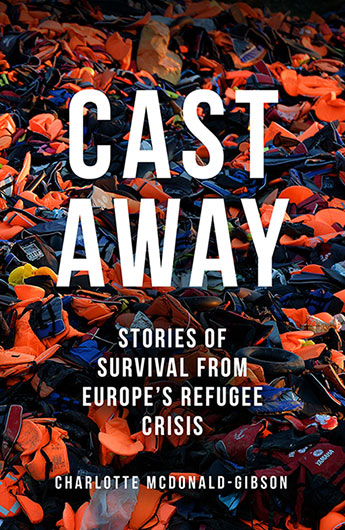 A compelling non-fiction exploration of the refugee crisis in the Mediterranean, told through the stories of those who have made the perilous journey and lived to speak of their experience.

Riot police are shutting down borders, 800 lives are lost in a single shipwreck, a boy's body washes up on a beach: this is the European Union in summer 2015. But how did a bloc founded upon the values of human rights and dignity for all reach this point? And what was driving millions of desperate people to risk their lives on the Mediterranean? Charlotte McDonald-Gibson has spent years reporting on every aspect of Europe's refugee crisis, and Cast Away offers a vivid glimpse of the personal dilemmas, pressures, choices and hopes that lie beneath the headlines.

We meet Majid, a Nigerian boy who exchanges the violence of his homeland for Libya, only to be driven onto a rickety boat during Colonel Gaddafi's crackdown on migrants. Nart is an idealistic young lawyer who risks imprisonment and torture in Syria until it is no longer safe for him to stay. Sina has to leave her new husband behind and take their unborn son across three continents to try and escape the Eritrean dictatorship. Mohammed is a teenager who dreams of becoming the world's best electrician until he is called to serve as a foot-soldier in the Syrian army. And Hanan watches in horror as the safe life she built for her four children in Damascus collapses, and she has to entrust their lives to people smugglers. While the politicians wrangle over responsibility, and the media talk in statistics, Cast Away brings to life the human consequences of the most urgent humanitarian issue of our time.
More books by this author

Charlotte McDonald-Gibson has worked as a foreign correspondent for 14 years, reporting from three continents for the international media. From 2011 to 2013 she was Deputy Foreign Editor of the Independent, overseeing the paper's coverage of key world news events including the Arab Spring. Now based in Brussels, she writes about Europe for the Independent, TIME, and other publications. This is her first book.