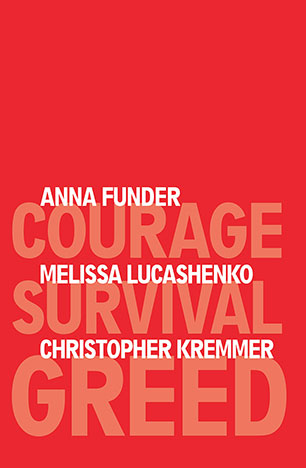 'You don't have to be a writer to speak the truth as you see it, but you can't be a good writer without doing so. It is not, in the first instance, the painters and sculptors and bakers locked up or killed in China or Russia or the Third Reich: it is the writers. It is generally the writers, relying on empathy, reason and very sharp tools, who plant the stake first.' Anna Funder, from 'Courage'

'Now that we all face the possible catastrophe of climate change, the Murri man's simple assurance - the country will teach you - has come to seem more like a curse than anything else.' Melissa Lucashenko on 'Survival'

'There's an old saying on stock and financial markets. When there is more greed than fear, the market rises. When fear outweighs greed, the market falls.' Christopher Kremmer on 'Greed'

Anna Funder examines the nature of courage in a powerful and moving essay, commemorating the life and work of the 'bravest of the brave', murdered Russian journalist Anna Politkovskaya, and other remarkable women who have stood up to totalitarian regimes at unthinkable cost to themselves.

Australian history is full of images of ingenious settlers battling against the harsh, unforgiving land in order to survive. But is the European notion of 'survival' different from the indigenous one? Aboriginal writer Melissa Lucashenko argues eloquently and passionately that it is.

Did the notion that 'Greed is Good' die out with the 1980s? Perhaps at no other moment in living memory has greed played such a defining - and damning - role. At once clear-eyed and coruscating, Christopher Kremmer contemplates greed from all angles: social, historical, economic and cultural.

Three brilliant essays written by leading and acclaimed Australian writers, commissioned by Sydney PEN, unflinchingly show us our world as never before.
More books by this author

Anna Funder is the author of Stasiland, which was shortlisted for many prizes in Australia and Britain and in 2004 received the world's largest non-fiction award, the BBC 4 Samuel Johnson Prize.

Melissa Lucashenko is an award-winning novelist and essayist. Her novels, including Steam Pigs, Killing Darcy and Hard Yards have won or been short-listed for numerous awards, including the Dobbie, Kibble, Courier Mail Book of the Year, and NSW Premier's and Commonwealth Writer's awards. Melissa works for the prisoner support organisation Sisters Inside, which she helped found in the 1990s.

Christopher Kremmer is the best-selling author of The Carpet Wars, Bamboo Palace and Inhaling the Mahatma. His books have been shortlisted for The Age and Courier Mail Book of the Year awards, the New South Wales and Victorian Premier's Literary Awards, and the Australian Book Industry Awards. Christopher has also penned prize-winning short-fiction and written for the ABC and Fairfax Media.