The dangers of unsustainable growth for Australia 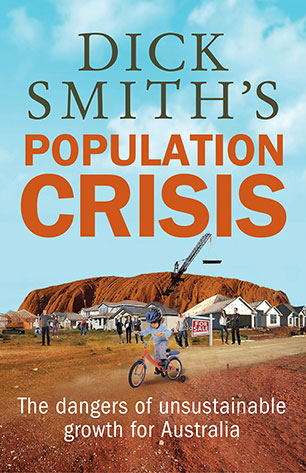 Dick Smith takes on the hot topic of our times, arguing that Australian and global population growth carries enormous risks, dangers that none of our political parties is prepared to address.

In 2011 the world's population exceeded 7 billion. Each year we add nearly 80 million people and by mid-century we will require twice as much food and double the energy we use today. Australia will be deeply affected by these trends - we have the fastest growing population of any developed nation.

These are the staggering facts that confronted Dick Smith. They set him on his crusade to alert us to the dangers of unsustainable growth. They are the facts that have convinced him that if we are to ensure the survival of our civilisation and the health of the planet then we must put a stop to population growth, now.

As our cities continue their unrestrained growth, as we battle daily on crowded public transport and clogged freeways, and as we confront the reality of water and power shortages, Dick challenges the long-held myth that growth is good for us. But more importantly he offers ways for us to re-invent our economy, to reassess the way we live and to at least slow down that ticking clock. This is a provocative, powerful and urgent call to arms.
More books by this author

Dick Smith is one of Australia's most recognised individuals. A multi-millionaire philanthropist and adventurer, who originally made his fortune retailing electronics and then founded Australian Geographic magazine, Dick Smith has since become well known as a restless adventurer, making many pioneering and record breaking flights by helicopter, aeroplane and balloon.

Category: Current Affairs & Politics
ISBN: 9781742376578
Table Of Contents: Introduction: The People Problem-How a Growing Population Makes Everything Harder, for Australia and the World

1. Welcome to the World of Exponential Growth

3. Mouths to Feed-Will We Have Enough Food and Water or be Killed Off First by Obesity?

4. Dying for a Drink

5. The Future is Blowin' in the Wind

8. Preparing Ourselves for the Age of Scarcity-the N2N Path from Natural Gas to Nuclear

10. Overshoot-Too Many People and Too Much Stuff

11. Our Addiction to Exponential Growth

12. The Search for Solutions-The Girl Effect

13. The Search for Solutions-Sharing the Wealth

14. The Search for Solutions-Curing the Growth Addiction

15. Summing It Up-The State of the World Today

Appendix: There is an Alternative to Runaway Population-Kelvin Thomson's 14-point Plan for Population Reform