Cultural elites and the new generationalism 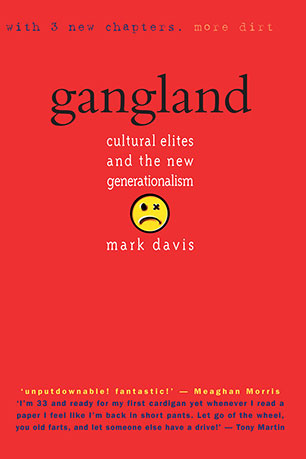 The 1990s bestseller that exposed an inter-generational war in Australia, this revised edition of Gangland includes three extra chapters.

Panics over the culture wars, political correctness and victim feminism, rap music, ecstasy and body piercings . . . our cultural landscape is currently peppered with examples of a desperately backward-looking stasis and a fearful hanging-on.

In Gangland Mark Davis analyses the dated ideals and assumptions of Australia's cultural establishment, and their near monopoly on cultural debate. Who are these people? What do they do? How is their influence affecting public forums and the media? Where does that leave the young people of today?

Davis's irreverent prose cuts across the moral panics and anxieties that characterise Australian culture to detect a deep-seated fear of change - a fear that is often expressed as hostility towards youth. Gangland names names and maps networks, laying bare the discrepancies between reality and the images peddled by some of Australia's most popular thinkers, questioning the ideas that have characterised Australia in the nineties.

'Finally somebody on the side of late teens and twentysomethings in Australia . . . [a] brilliant argument of a book' Adrian Smart, Cream

'Gangland has sparked a valuable debate, one which I've been looking forward to for years' Kathy Bail, Australian Book Review
More books by this author

Mark Davis teaches in the School of Culture and Communication at the University of Melbourne. He is the co-editor (with Miriam Lyons) of More Than Luck: Ideas Australia Needs Now, and the author of The Land of Plenty: Australia in the 2000s.

2 The new establishment: on now at a media outlet near you.

6 The culture racket: making a literature

8 An illiberal education: liberals versus the 'postmodern'.

9 Canned goods and culture wars: the Metropolis comes to town.