Inside the Australian Wheat Board scandal 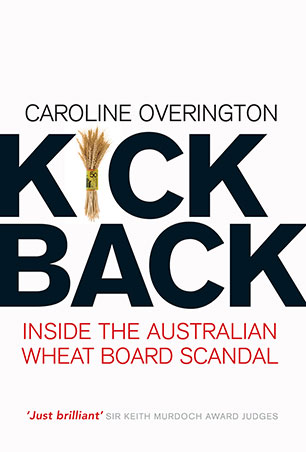 From the award-winning journalist who first broke the story, here - in forensic detail - is the incredible true story of how the Australian Wheat Board funnelled hundreds of millions of dollars to Saddam Hussein's regime on the eve of the 2003 war.

Who planned it? How was it allowed to happen? Who is to blame? And what is the real cost of one of the world's biggest swindles?

On the eve of the war in Iraq, Australia's wheat exporter, AWB Ltd - a company once owned and controlled by the Federal government - sent more than $290 million to the brutal regime of Saddam Hussein. It bolstered the tyrant's grip on power and weakened the United Nations sanctions designed to bring him to his knees. The money flowed right up until the day Australian troops were sent to Iraq to fight a bloody war on the streets of Baghdad.

The Howard government was repeatedly warned that AWB was up to its neck in corruption but took no action. And when the scandal was finally uncovered, Prime Minister John Howard, Minister for Foreign Affairs Alexander Downer and Trade Minister Mark Vaile denied all knowledge of the scam. A shadow was cast over Australia's reputation in international trade and a billion dollars' worth of business was lost.

Caroline Overington's expos of what really happened is nothing short of engrossing. Thriller-like in style, forensic in research, this is an unflinching account of the AWB scandal and its political aftermath.

This is a tale of monumental proportion. Read Kickback and be appalled.
More books by this author

In November 2006, Caroline Overington was awarded the Sir Keith Murdoch Award for Journalism for her series of more than 100 articles uncovering the AWB Iraqi kickbacks scandal. She was Fairfax newspaper's New York correspondent when rumours of the AWB scandal first began circulating through the United Nations. With great tenacity, and in the face of accusations of ratbag journalism, she clung to the story until the truth was finally revealed. A former sports writer, Caroline won the Prime Ministerial Women and Sport Award for journalism in 1996. Along with Malcolm Knox she won the 2004 Walkley Award for Investigative Journalism for their report in the Sydney Morning-Herald the 'Norma Khouri Investigation'. She currently writes for The Australian, is the author of Only in New York, and lives in Sydney with her husband and two children.