Requiem for a Species

Why we resist the truth about climate change 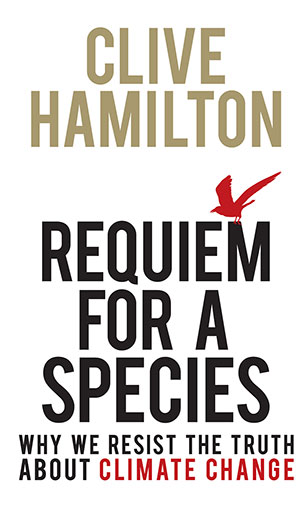 We know how dire the future looks. We know how little time we have left to act. Yet we continue to ignore the warnings. One of Australia's sharpest thinkers explores the reasons why and offers his vision of our new future.

Sometimes facing up to the truth is just too hard. There have been any number of urgent scientific reports in recent years emphasising just how dire the future looks and how little time we have left to act. But around the world only a few have truly faced up to the facts about global warming.

This book is about why we have ignored those warnings, so that now it is too late. It is a book about the frailties of the human species: our strange obsessions, our hubris, and our penchant for avoiding the facts. It is the story of a battle within us between the forces that should have caused us to protect the earth, like our capacity to reason and our connection to nature, and our greed, materialism and alienation from nature, which, in the end, have won out.

And it is about the 21st century consequences of these failures, and what we can do now.

Because we don't have to take this lying down.

'Requiem for a Species magnificently captures the idea that by and large, none of us want to believe that climate change is real. It explains our inability to seriously weigh the evidence of climate change, and to take appropriate action to ensure our own survival.' - Tim Costello, CEO, World Vision Australia

'Clive Hamilton, as usual, has courageously challenged the current nature of our society in this inspirational new book.' - Graeme Pearman, former head of the CSIRO Division of Atmospheric Research
More books by this author

Clive Hamilton is author or co-author of the bestselling Affluenza, Growth Fetish, Scorcher and Silencing Dissent. One of Australia's leading thinkers, he is Charles Sturt Professor of Public Ethics at the Centre for Applied Philosophy and Public Ethics, based at the Australian National University.

1 No escaping the science

4 Many forms of denial