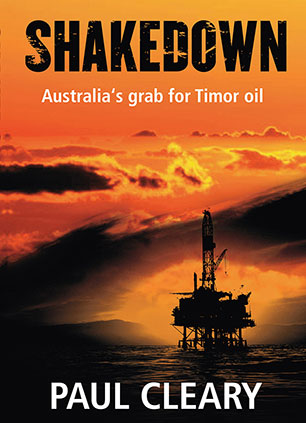 The compelling inside story of how Australia attempted to bully East Timor out of its rights to the lucrative oil and gas resources of the Timor Sea and the people, both heroes and villains, who played the game for a nation's future.

In 2000 one of the poorest nations on earth began negotiations with Australia over rights to the lucrative oil and gas resources of the Timor Sea. With the revenue from the oil and gas fields, the young democracy of East Timor would have a chance to secure its economic future. If Australia would allow it.

In an ironic twist of fate, East Timor found that Australia, the country which had delivered freedom to the Timorese by intervening against Indonesia's bloody attacks in 1999, was now trying to deny it a fair share of the profits.

This is the inside story of Australia's attempts to bully East Timor out of a promising future in the Timor Sea oil dispute. Paul Cleary, a former East Timor government adviser, gives a gripping insider's account of the six years of bruising negotiations between Australia and East Timor that followed the independence ballot. He saw how the Timorese pulled off one of the great David and Goliath feats of the region but then were unable to lay the foundations for a peaceful future.

In this compelling insight into Australia's international operations, Cleary exposes the heroes and villains who emerged in a one-hundred-billion-dollar shakedown.
More books by this author

Paul Cleary grew up in Sydney's southwest and has worked as a journalist covering economic, social and tax policy for the Sydney Morning Herald and the Financial Review while based in Canberra Press Gallery for ten years. His revelations about secret Treasury analysis of the Howard government's 2000 Goods and Services Tax reform led to a Senate inquiry and improvements for low income groups. He lived in Hanoi for two years where he helped to establish the country's first English language daily, while working as a correspondent and studying Vietnamese. In 2002 he was awarded a Chevening fellowship by the UK Foreign Office for a masters in the political economy of development. After first visiting East Timor in 1997 he was an adviser in the East Timor government's Timor Sea Office from 2003-05, while also travelling extensively around the country and learning Tetum, Portuguese and Brasilian foho.

2 The Spoils of Conquest

3 The Kelp in the Coffin

4 The Get Out of Gaol Card

14 Calling in the Commandos

16 From Ashes to Ashes