The Bad-Ass Librarians of Timbuktu

and their race to save the world's most precious manuscripts 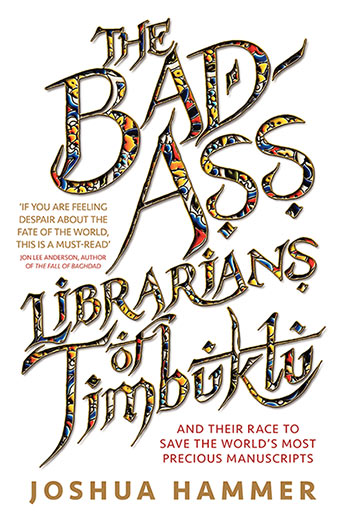 To save precious centuries-old Arabic texts from Al Qaeda, a band of librarians in Timbuktu pulls off a brazen heist worthy of Ocean's Eleven and Indiana Jones.

'Hammer has pulled off the truly remarkable here-a book that is both important and a delight to read . . . It is also an inspirational reminder that, even as the forces of barbarism extend their thrall across so much of the Muslim world, there are still those willing to risk everything to preserve civilization. A superb rendering of a story that needs to be told.' - Scott Anderson, author of Lawrence in Arabia

To save precious centuries-old Arabic texts from Al Qaeda, a band of librarians in Timbuktu pulls off a brazen heist worthy of Ocean's Eleven.

In the 1980s, a young adventurer and collector for a government library, Abdel Kader Haidara, journeyed across the Sahara Desert and along the Niger River, tracking down and salvaging tens of thousands of ancient Islamic and secular manuscripts that had fallen into obscurity. The Bad-Ass Librarians of Timbuktu tells the incredible story of how Haidara, a mild-mannered archivist and historian from the legendary city of Timbuktu, later became one of the world's greatest and most brazen smugglers.

In 2012, thousands of Al Qaeda militants from northwest Africa seized control of most of Mali, including Timbuktu. They imposed Sharia law, chopped off the hands of accused thieves, stoned unmarried couples to death and threatened to destroy the great manuscripts. As the militants tightened their control over Timbuktu, Haidara organized a dangerous operation to sneak all 350,000 volumes out of the city to the safety of southern Mali.

Over the past twenty years, journalist Joshua Hammer has visited Timbuktu numerous times and is uniquely qualified to tell the story of Haidara's heroic and ultimately successful effort to outwit Al Qaeda and preserve Mali's-and the world's-literary heritage. The Bad-Ass Librarians of Timbuktu is an inspiring and entertaining account of the victory of art and literature over extremism.
More books by this author

Joshua Hammer was born in New York and graduated from Princeton University with a cum laude degree in English literature. He joined the staff of Newsweek as a business and media writer in 1988, and between 1992 and 2006 served as a bureau chief and correspondent-at-large on five continents. Hammer is now a contributing editor to Smithsonian and Outside, a frequent contributor to the New York Review of Books, and has written for publications including the New Yorker, the New York Times Magazine, Vanity Fair, the Conde Nast Traveler, the Atlantic Monthly, and the Atavist. He is the author of three non- fiction books and has won numerous journalism awards. Since 2007 he has been based in Berlin, Germany, and continues to travel widely around the world.