The Invention of Russia

The Journey from Gorbachev's Freedom to Putin's War 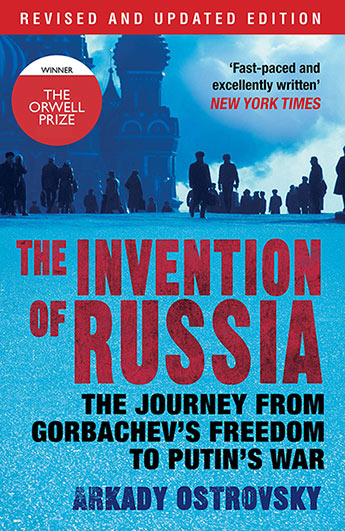 Revised and updated: the timely and gripping story of Russia since the collapse of Communism, with a new preface examining Putin's influence on the US election and exploring how his methods - weaponizing the media and serving up fake news - came to enter Western politics.

In 1985 Mikhail Gorbachev launched Perestroika, opened Russia up to the world, ended the Cold War and gave his people freedom. The demise of the Soviet Union offered hope that Russia would become a 'normal', 'civilized' country, embracing Western values of democracy and the free market. Thirty years later, Russia emerged as a corporate state, overcome by imperial nationalism, fanned by its authoritarian president Vladimir Putin, who smashed the post-Cold War order and ignited a war on the borders of Europe.

How did a country that embraced freedom over twenty-five years ago end up as an autocratic police state bent once again on confrontation with the West? In this Orwell Prize-winning book, Arkady Ostrovsky reaches back to the darkest days of the Cold War to tell the story of Russia's stealthy and largely unchronicled post-Soviet transformation.

Ostrovsky's knowledge of many of the key players allows him to explain the rise of Vladimir Putin and to reveal how he pioneered a new form of demagogic populism. In a new preface he examines Putin's influence on the US election and explores how his methods - weaponizing the media and serving up fake news - came to enter Western politics.

Arkady Ostrovsky is a Russian-born, British journalist who has spent fifteen years reporting from Moscow, first for the Financial Times and then as a bureau chief for The Economist. He studied Russian theatre history in Moscow and holds a PhD in English Literature from Cambridge University. His translation of Tom Stoppard's trilogy, The Coast of Utopia, has been published and staged in Russia.