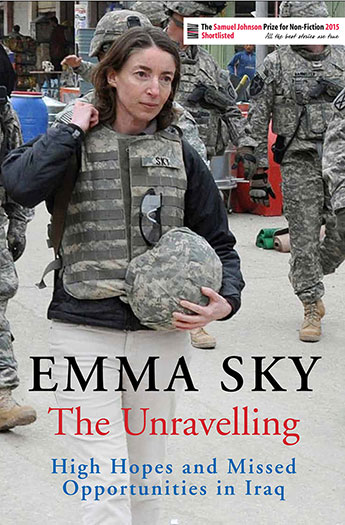 Shortlisted for the Samuel Johnson Prize 2015. The riveting first-hand account of a young British woman who, initially a civilian volunteer helping rebuild Iraq after the 2003 invasion, soon found herself as a political advisor to the US military.

When Emma Sky, an intrepid young British woman, volunteered to help rebuild Iraq after the overthrow of Saddam Hussein, she had little idea what she was letting herself in for. It was only supposed to last three months but instead spanned a decade. As the representative of the Coalition Provisional Authority in Kirkuk and then the political advisor to US General Odierno, Sky was valued for her outspoken voice and unique perspectives. Called the 'modern-day Gertrude Bell' by The Times, Sky has been a tireless witness to American efforts to transform a country traumatized by decades of war. She provides unique insights into the US military, and the complexities, diversity and evolution of Iraqi society. With sharp detail, tremendous empathy and respect for those who served, The Unravelling is an intimate portrait of how and why the Iraq adventure failed despite the best and often heroic efforts of its young men and women on the ground.
More books by this author

Emma Sky is a Senior Fellow at Yale University's Jackson Institute. She worked in the Middle East for twenty years and was made an Officer of the Order of the British Empire for services in Iraq. She lives in New Haven, Connecticut.