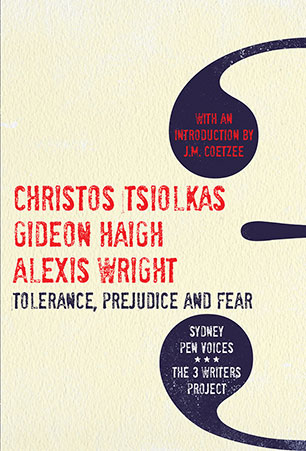 In early 2007, Sydney PEN commissioned the 3 Writers Project, a series of essays and public lectures in which three of our leading and acclaimed writers - Alexis Wright, Gideon Haigh and Christos Tsiolkas - tackled topics of vital importance to contemporary Australia: tolerance, prejudice and fear. Allen + Unwin is honoured to publish the essays in one collection, with an introduction from Nobel Laureate J.M. Coetzee.

Christos Tsiolkas questions why the notion of tolerance has replaced the language of justice, equality and rights in today's political vocabulary. He asks why the liberal left has failed to counter the rhetoric of the 'clash of civilisations'. Tsiolkas claims this is a failed logic which damns multiculturalism in favour of nationalism. He argues that in this new globalised world, we need to create a set of ethics that goes beyond tolerance.

Gideon Haigh traces the phenomenon of nationalism from its enlightenment origins through its fascist excesses and examines how Australia arrived at its own sense of nationhood. What underlies our latest incarnation: a shrill, aggressive, brittle politics of narcissism, pioneered by Pauline Hanson, and pandered to by John Howard. It also ponders how the process reduced the liberal left to mute onlookers.

Alexis Wright asserts that Australia's lack of tolerance and adoption of prejudice as patriotism has led to a fear that paralyses both Aboriginal and white Australians. She asks whether fear can rob hope, and argues passionately that we must resist personal and collective fear and trust literature to tell the truth about 'the darkness inside'.

This impassioned and provocative trinity of essays is testament to the linguistic power and fierce intellect of these important Australian writers.
More books by this author

ALEXIS WRIGHT is a Waanji woman from the southern Gulf of Carpentaria. Her latest book, Carpentaria, won the 2007 Miles Franklin Award, and the Victorian and Queensland Premiers' Literary Award. Alexis was coordinator of the NT Aboriginal Constitutional Convention in 1993 and wrote 'Aboriginal Self Government' for Lands Rights News.

GIDEON HAIGH'S most recent book, Asbestos House, won the NSW Premier's Literary Award Gleebooks Prize 2007. He has written about business and sport, including his great passion, cricket, for over 20 years, contributing to an extensive range of newspapers, magazines and journals in Australia and overseas.

CHRISTOS TSIOLKAS wrote the novels Loaded, The Jesus Man and Dead Europe, which won the Age 2006 Book of the Year Fiction Award. He is also the author of several plays including Who's Afraid of the Working Class? and Dead Caucasians and Non Parlo di Salo, co-written with Spiro Economopoulos.