In Search of Total Perfection 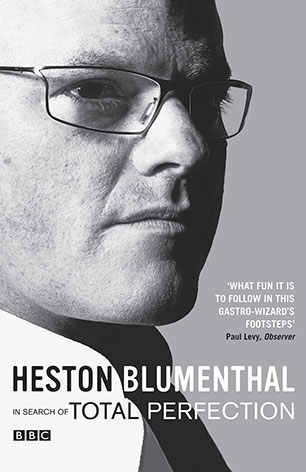 A single-volume edition of Heston Blumenthal's two Perfection books, in which he reinvents the kitchen classics.

Heston Blumenthal has made his name creating such original dishes as Snail Porridge and Nitrogen Scrambled Egg and Bacon Ice Cream at his internationally acclaimed restaurant, The Fat Duck. In this book, Heston focuses his creative talent on reinventing some of our most well-known (and most abused) dishes.
He travels around the world in search of definitive versions of sixteen classic dishes: Roast Chicken and Roast Potatoes, Pizza, Hamburger, Bangers and Mash, Fish Pie, Steak, Spaghetti Bolognese, Risotto, Fish and Chips, Chilli Con Carne, Chicken Tikka Masala, Peking duck, Black Forest Gateau, Treacle Tart and Ice Cream, Trifle and Baked Alaska.
Among the many adventures on his quest, he travels to Delhi and makes an MRI scan of the marinated chicken in his Tikki Masala; he discovers the secret to the ultimate crispy duck in Peking and experiments at home by inflating a Gressingham on a footpump; he walks the Dickensian streets of Lambeth and learns how to capture the essence of a fish and chip shop in a perfume bottle, and he explores the Willy Wonka-esque Tate and Lyle factory and tastes some seventy-year-old syrup that proves an inspiration for the flavour of his treacle tart.
In Search of Total Perfection is an original, inspiring and fascinating voyage around the culinary globe.
More books by this author

Chef Heston Blumenthal has been described as a culinary alchemist for his innovative style of cuisine. His work researches the molecular compounds of dishes so as to enable a greater understanding of taste and flavour. His restaurant The Fat Duck, in Bray, Berkshire, was awarded three Michelin stars in 2004, and voted the Best Restaurant in the World by an international panel of 500 culinary experts in Restaurant Magazine's The World's 50 Best Restaurants 2005. He also owns the Hinds Head Hotel, a village pub in Bray. Heston Blumenthal lives in Berkshire with his wife and three children.