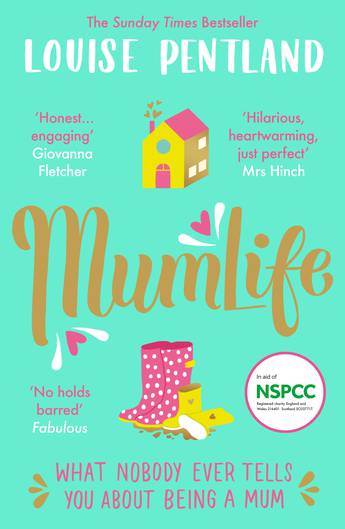 'Hilarious, honest, heartwarming, like a hug from a friend, just perfect. I couldn't love this ""mumoir"" more' - Mrs Hinch

An honest account of becoming a woman and mother... an engaging read' - Giovanna Fletcher

MumLife; noun: the inescapable swirling vortex of love, guilt, joy, annoyance, laughter and boredom that makes up the life of a mum.

Louise Pentland has been through a lot. From a traumatic birth with her first daughter, to single motherhood, to finding love again and having a second child, Louise's parenting journey has been full of surprises.

Discussing the realities most working mums face, plus the impact of maternal mental health, Louise is on a mission to make other mums feel less alone, and very much heard. She beautifully reveals her own imperfect but perfect route to motherhood, as well as the loss of her mum so early in her life, how it shaped her and the mother she became.

Reflective, uplifting and with her signature hilarious wit, MumLife will share Louise's ups and downs, reflecting on her route to motherhood and what she has learnt along the way. This is the honest truth, from someone who's been there and experienced it all.

For each book sold Bonnier Books UK shall donate 1% of net receipts and Louise Pentland shall donate 100% of her royalties to the NSPCC.
More books by this author

Louise Pentland is the Sunday Times bestselling author of the Wilde novels. She's the number one parenting vlogger in the UK, with 8 million combined followers across her social platforms. Louise is the creator and host of the podcast Mothers' Meeting, where she interviews fellow mums and discusses all things motherhood.

Louise featured on the 2019 'Sunday Times Top 100 Influencers' list and writes for Mother & Baby magazine, who crowned her as the number one 'mumfluencer' of 2019. She was also a UN Global Ambassador for Gender Equality. Louise has filmed with an array of people, from Kim Kardashian to the Pope at the Vatican. She is also involved in the support and encouragement of childhood literacy with charity Bookstart, alongside Prince Charles and the Duchess of Cornwall.