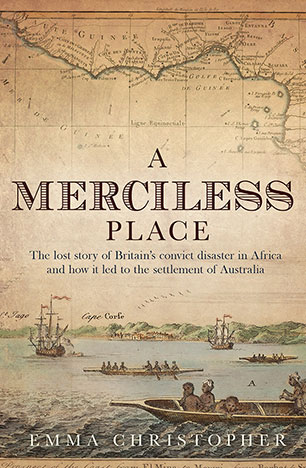 This is a story lost to history for over two hundred years; a dirty secret of failure, fatal misjudgement and desperate measures which the British Empire chose to forget almost as soon as it was over.

In the wake of its most crushing defeat, the America War of Independence, the British Government began shipping its criminals to West Africa. Some were transported aboard ships going to pick up their other human cargo: African slaves. When they arrived at their destination, soldiers and even convicts were forced to work in the region's slave-trading forts guarding the human merchandise.

In a few short years the scheme brought death, wholesale desertions, mutiny, piracy and even murder. Some of the most egregious crimes were not committed by the exported criminals but by those sent out to guard them. Acts of wanton desperation added to rash transgressions as those whom society had already thrown out realised that they had nothing left to lose.

As jail and prison hulks overflowed, and as every other alternative settlement proved unsuitable, the British Government gambled and decided to send its criminals as far away as possible, to the great south land sighted years before by Captain James Cook. Out of the embers of the African debacle came the modern nation of Australia.

The extraordinary tale is now being told for the first time - how a small band of good-for-nothing members of the British Empire spanned the world from America, to Africa, and on to Australia, profoundly if utterly unwittingly changing history.
More books by this author

Emma Christopher gained her PhD from University College London in 2002 and has also studied at the University of Pennsylvania and taught at the University of Toronto. She has received grants and fellowships from the British Academy, the Royal Historical Society and Harvard University's Atlantic World Centre. She has also been a Mellon Fellow at the Huntington Library in California, a Caird Fellow at the National Maritime Museum in London and a Paul Cuffe Fellow at Mystic Seaport Museum, Connecticut. She has been a member of Harvard's annual Atlantic World Seminar and attended a UNESCO slave route project in West Africa. She currently holds two Australia Research Council fellowships and is on the faculty of the Department of History at the University of Sydney.

4 THE 'BEST SACRIFICES FOR DEATH'

6 THE BATTLE FOR THE COAST

7 DESERTING TO THE ENEMY

8 A PLANTATION WITH SLAVES

9 A MUTINY AND A MOST PECULIAR MURDER

11 'NAKED AND DISEASED ON THE SANDY SHORE'

13 THE ONCE MIGHTY ARE FALLEN

15 THE END OF THE AFRICAN DISASTER