A University of the People

A history of the University of Western Sydney 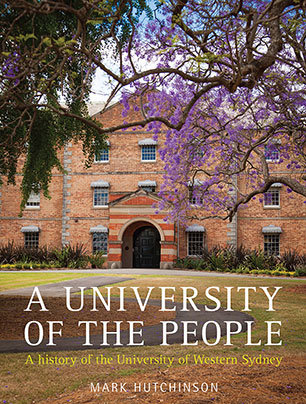 The story of the university that serves the people of Western Sydney, from agricultural college to a modern education, research and regional hub.

In 1813 the Female Orphan School was built in sandstone on the banks of the Parramatta River, but it took another 175 years before the people of Western Sydney had their own university.

A University of the People tells the story of how a modern university emerged from colonial colleges formed to train farmers and mechanics. The burgeoning population on the Cumberland Plain after World War II drove pressure for educational, health and other services. In 1972 the newly elected prime minister Gough Whitlam declared the next university in NSW would be built in the western suburbs.

The University of Western Sydney emerged in 1989, first as a federation of colleges, and then as an increasingly unified institution. Today more than 40,000 students study an expanding range of personal and professional disciplines, and the University has a growing national and international reputation for the teaching and research that is central to the flourishing of one of Australia's critical economic and political hubs.

Through the swings and roundabouts in the Australian Higher Education sector since its foundation - which have seen federal rationalisation, student fees and protests, the challenges of casualisation and shrinking sectoral resources - the 'University of the People' has retained its original commitment to the nation, starting with the people of Greater Western Sydney.
More books by this author

Mark Hutchinson is an Australian cultural and social historian who has focused across most of his career on the Australian and global histories of religion and education. From 2011-2012, he was University Historian at the University of Western Sydney, before moving to his current role as Dean of Humanities at the Scots College.

A note on the sources