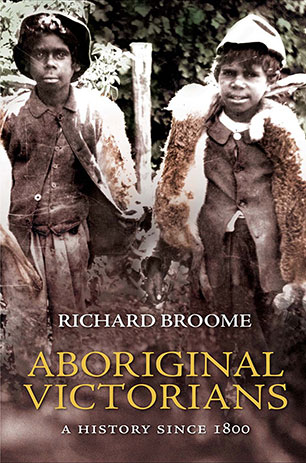 The fascinating and sometimes horrifying story of Aborigines in Victoria since white settlement, from one of Australia's leading historians.

Early settlers saw Victoria and its rolling grasslands as Australia felix happy south land a prize left for Englishmen by God. However, for its original inhabitants this country was home and life, not to be relinquished without a fierce struggle.

Richard Broome tells the story of the impact of European ideas, guns, killer microbes and a pastoral economy on the networks of kinship, trade and cultures that various Aboriginal peoples of Victoria had developed over millennia. From first settlement to the present, he shows how Aboriginal families have coped with ongoing disruption and displacement, and how individuals and groups have challenged the system. With painful stories of personal loss as well as many successes, Broome outlines how Aboriginal Victorians survived near decimation to become a vibrant community today.

The first history of black-white interaction in Victoria to the present, Aboriginal Victorians traces the story of Aboriginal people through consultation and interviews with Aboriginal communities and families and rich historical research, to produce a compelling and even-handed epic. It won the NSW Premier's History Awards Australian History Prize (2006) and the Victorian Community History Awards Best Print Publication Award (2007), and was short-listed for the Human Rights Awards Non-Fiction Award (2005).

'Richard Broome is to be congratulated for writing this history in a style that is easy to read, very informative and brings the past to the present.' - Jim Berg, JP, Gunditjmara man, founder and director of the Koorie Heritage Trust

RICHARD BROOME is a Professor of History and Associate at La Trobe University. One of Australia's most respected scholars of Aboriginal history, he has written many articles and books including Aboriginal Australians and Sideshow Alley.

9. A miserable spadeful of ground'

15. Assimilation and its challengers