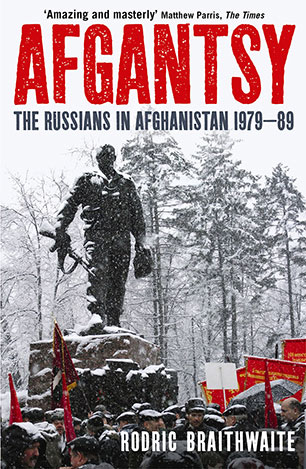 The Soviet-Afgan war through the eyes of the Russians themselves - politicians, officers, soldiers, advisers, journalists, women.

As a former ambassador to Moscow, Rodric Braithwaite brings unique insights to the Soviet War in Afghanistan. The story has been distorted not only by Cold War propaganda but also by the myths of the nineteenth century Great Game. It moves from high politics of the Kremlin to the lonely Russian conscripts in isolated mountain outposts. The parallels with Afghanistan today speak for themselves.

Rodric Braithwaite is basing his account in Afgantsy on Russian sources and interviews - showing the war through the eyes of the Russians themselves; politicians, officers, soldiers, advisers, journalists and women.
More books by this author

Rodric Braithwaite was British Ambassador to Moscow during the crucial years of 1988-92. Subsequently he was foreign policy advisor to John Major. His books include Across the Moscow River and the highly praised and bestselling Moscow 1941 which has been translated into seventeen languages.