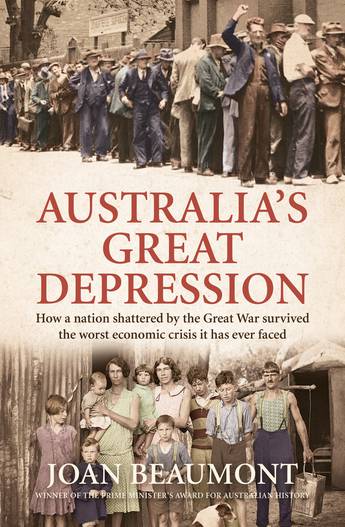 How a nation still in grief from the Great War found the courage and resilience to face a new tragedy, the Great Depression.

Some generations are born unlucky. Australians who survived the horrors of the Great War and the Spanish flu epidemic that followed were soon faced with the shock of the Great Depression. Today we remember long dole queues, shanty towns and destitute men roaming the country in search of work. With over a third of the workforce unemployed in 1932, Australia was one of the hardest hit countries in the world. Yet this is not the complete story.

In this wide-ranging account of the Great Depression in Australia, Joan Beaumont shows how high levels of debt and the collapse of wool and wheat prices left Australia particularly exposed in the world's worst depression. Threatened with national insolvency, and with little room for policy innovation, governments resorted to austerity and deflation. Violent protests erupted in the streets and paramilitary movements threatened the political order.

It might have ended very differently, but Australia's democratic institutions survived the ordeal. Australia's people, too, survived. While many endured great hardship, anger, anxiety and despair, most 'made do' and helped each other. Some even found something positive in the memory of this personal and communal struggle. Australia's Great Depression details this most impressive narrative of resilience in the nation's history.

'A magisterial account of an immense tragedy, told with authority, poignancy and drama.' - Frank Bongiorno, Professor of History, The Australian National University

'A masterpiece by one of Australia's most esteemed historians' - David Day, historian

'Beaumont's brilliant study is the comprehensive history of the Great Depression that we have been waiting for.' - Stephen Garton AM, Senior Deputy Vice-Chancellor, The University of Sydney
More books by this author

Joan Beaumont is Professor of History at the Strategic and Defence Studies Centre, Australian National University, and author of the magisterial and multi-award winning account of Australia's experience of World War I, Broken Nation.

Part II Recovery, Visions and Recession, 1919-29
4 Recovery and development
5 The voracious borrower
6 Recession
7 Over the cliff

Part III Depression, 1929
8 What caused the Great Depression?
9 Scullin's poisoned chalice
10 The unemployed
11 The voluntary sector to the rescue