The story of the man who wrote Waltzing Matilda 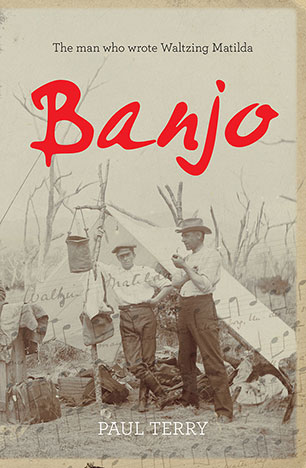 A timely re-examination of the life of Australia's best-loved poet and storyteller - the man whose works captured the essence of the Australian spirit.

In 1886, a nervous young lawyer and aspiring writer met the editor of a radical new paper to discuss the possibility of publishing some poetry. He thought his 'fractured verses' would not stand the test of time. The editor believed otherwise and in the years that followed, Banjo Paterson became Australia's most-loved and influential poet.

In a life that took him from a bush boyhood to the battlefields of South Africa and the turmoil of the Great War, Banjo Paterson rubbed shoulders with the rich and famous. But the heroes of his tales were ordinary folk bushmen, battlers, swaggies and soldiers. He told their stories of humour, tragedy and triumph set against a landscape that is both grindingly harsh and stunningly beautiful, and his words rolled off Australian tongues for generations.

From the political upheaval captured in 'Waltzing Matilda' to the wistful longing for the bush in 'Clancy of the Overflow', Banjo follows the life and inspirations of AB Paterson. We meet the men and women who shaped the young Australian nation as it shook off its convict beginnings to embrace its own place on the world stage and who defined our national character today.

Paul Terry is a producer with 7 Prime, and has worked as a journalist in radio, television and newspapers in NSW, SA and Tasmania. He is author of the The True Story of Ned Kelly's Last Stand and In Search of Captain Moonlite.

Marking 150 years since the birth of one of Australia’s iconic writers in 1864, Paul Terry has written the biography on A.B. (Banjo) Paterson. As we focus on his time in our history as we commemorate World War I (Paterson was a war correspondent for the Boer War and served as a remount officer in WWI despite already being 50 at its outbreak) Terry not only examines Paterson’s life but also the people and the circumstances that influenced him. It is these encounters which formed the backbone of his writing, producing the bush ballads that are part of the Australian psyche.

This is a very readable biography which looks at the man, his family and friends and his life rather than more common literary criticism of his work, yet still clearly showing the factors that influenced his writing. Students who have discovered 'The Man from Snowy River', 'Mulga Bill’s Bicycle', 'The Bush Christening' and 'Clancy of the Overflow' and who want to know about the man behind the words will love this.
Barbara Braxton, Teacher Librarian, Cooma NSW