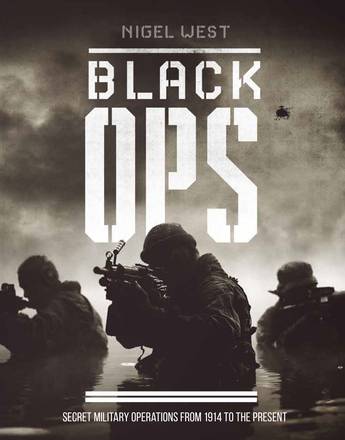 A compelling anthology of spies, soldiers, mercenaries and assassins, Black Ops tells the secret history of 20th- and 21st-century warfare.

Black Ops is a thrilling compendium of undercover warfare from around the world. Here you will meet the most hardened soldiers and operatives facing extraordinary dangers deep behind enemy lines.

The book features many amazing stories from World War II, such as the assassination of Holocaust architect Reinhard Heydrich by Britain's Special Operations Executive, which in 1940 received its mission from Churchill to 'set Europe ablaze' in the battle against Nazi tyranny. Also told are the stories of Stalin's favourite spy; the little-known account of how Japanese military codes were cracked; and Operation Mincemeat, which led to the invasion of Sicily.

Written by a leading military intelligence expert, Black Ops ranges across a century of remarkable clandestine operations. Starting with Hans Carl Lody, the first German spy during World War I, we also have the plot to assassinate Lenin; the origins of strategic deception; and the Cold War defection of Oleg Gordievsky from the Soviet Union. The book is brought right up to date with the plot to assassinate Osama bin Laden by Navy SEALS in 2011, and the attempted assassination of the Skripals in the UK in 2018, leading to fears that the world is on the brink of a new Cold War.

A compelling anthology of spies, soldiers, mercenaries and assassins, Black Ops tells the secret history of 20th- and 21st-century warfare.
More books by this author

Nigel West is an author specialising in security, intelligence, secret service and espionage issues. He is the European Editor of the World Intelligence Review, published in Washington DC, and the editorial director of The St Ermin's Press. In 1989 he was voted 'The Experts' Expert' by the Observer in London. He writes regularly for SpearsWealth Management Survey and works with The Centre for Counterintelligence and Security Studies.