British Museum: The Legend of Troy 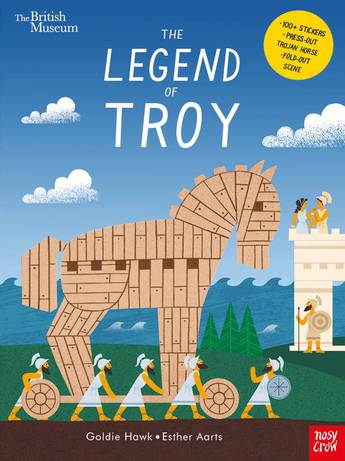 Uncover one of the world's greatest tales in this fantastic book for children aged 6+!

Coinciding with the hotly anticipated British Museum exhibition Troy: Myth and Reality in November 2019, this is the fascinating story of the destruction of an ancient city and the many ways it has been told and retold over time. Featuring fearsome warriors, powerful goddesses and menacing monsters, these tales have captivated children and adults for thousands of years. But are they really just tales? Where was the real Troy? And why are people still so obsessed with this legendary city? Accessible, intriguing and funny in equal measure, this is the perfect book to get children excited about Greek mythology and digging up the past.
More books by this author

Goldie Hawk (Author)
Goldie Hawk is a children's book writer and editor based in London. She spent much of her childhood running wild on Wimbledon Common or with her nose in a book, and now spends her time researching and writing about all kinds of topics, from historical houses to the art of den-building.

Esther Aarts (Illustrator)
Esther Aarts is a Dutch illustrator currently working from her studio in an old soap factory. She loves drawing people, especially in motion, suspended in air or interacting physically with their surroundings. Esther's illustrations have appeared in international newspapers, magazines, on greeting cards and T-shirts.

In her spare time, Esther loves trampolining, cycling and being outdoors. Esther lives in Nijmegen, supposedly the oldest city in the Netherlands. Several Roman artefacts were found in her area, but none in her garden so far, so she keeps digging.