Australians in the Great War 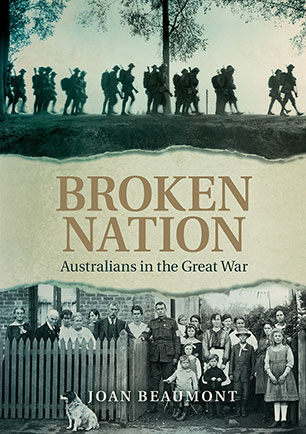 The Australian experience of war in all its complexity - from the home front as well as the battlefront - as the men and women who experienced it chose to understand and remember it.

'If you read only one book about Australia's experience of World War I, make it Broken Nation, an account that joins the history of the war to the home front, and that details the barbarism of the battlefields as well as the desolation, despair, and bitter divisions that devastated the communities left behind.' - Marilyn Lake, Australian Book Review

The Great War is, for many Australians, the event that defined our nation. The larrikin diggers, trench warfare, and the landing at Gallipoli have become the stuff of the Anzac 'legend'. But it was also a war fought by the families at home. Their resilience in the face of hardship, their stoic acceptance of enormous casualty lists and their belief that their cause was just made the war effort possible.

Broken Nation is the first book to bring together all the dimensions of World War I. Combining deep scholarship with powerful storytelling, Joan Beaumont brings the war years to life: from the well-known battles at Gallipoli, Pozieres, Fromelles and Villers-Bretonneux, to the lesser known battles in Europe and the Middle East; from the ferocious debates over conscription to the disillusioning Paris peace conference and the devastating 'Spanish' flu the soldiers brought home. We witness the fear and courage of tens of thousands of soldiers, grapple with the strategic nightmares confronting the commanders, and come to understand the impact on Australians at home, and at the front, of death on an unprecedented scale.
More books by this author

Joan Beaumont is Professor of History at the Strategic and Defence Studies Centre, Australian National University, and has published several books about World Wars I and II.