The death of a convict station 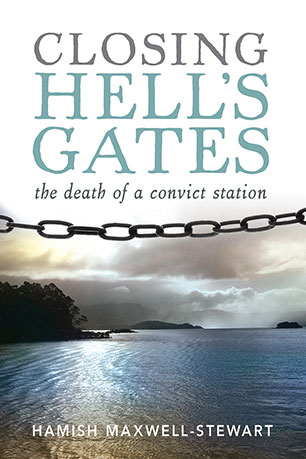 Based on an elaborate reconstruction of day-to-day life at Macquarie Harbour, one of Australia's most notorious sites of convict punishment, this is the true story of how, in 1827, nine convicts opted for 'state-assisted' escape (the death sentence) rather than endure the hardships and privations of the penal settlement on Sarah Island.

In October 1827, nine convicts who had endured years of unimaginable cruelty at the hands of the system opted for 'state-assisted' escape. Five terrified witnesses - their hands and feet bound - were forced to watch as the chained convicts seized Constable George Rex and drowned him in the tannin-stained waters of the harbour. When the sentence of death was pronounced upon them, the condemned prisoners uttered just one word in reply: Amen.

For twelve long years between 1822 and 1834, Sarah Island in Macquarie Harbour was the most feared place in Australia. Clinging to the shores of the wild west coast of Tasmania and hemmed in on all sides by rugged uncharted wilderness, the environment itself formed the prison walls that confined the unfortunate convict re-offenders who were sent there. But the conditions were so brutal that many went mad, or chose death or a very uncertain escape into the bush rather than spend their time in this notorious place.

Based on detailed accounts from the time, Closing Hell's Gates contains dozens of personal stories of the harsh and unforgiving life that people were forced to lead, both as convict and overseer, and in so doing reveals some startling insights about human nature when it is pushed to extremes.
More books by this author

Dr Hamish Maxwell-Stewart is an academic expert on convict life in Australia who teaches History and Classics at the University of Tasmania. Born in Nigeria, raised in England, and schooled at the University of Edinburgh, he migrated to Tasmania in 1996 where he is now internationally recognised for his work on the history of convict transportation. He has published a number of books on the subject, most notably Chain Letters: Narrating Convict Lives (MUP, 2001) with Lucy Frost for which they won the inaugural Kay Daniels award, and Pack of Thieves?: 52 Port Arthur Lives (Port Arthur Historic Site Management Authority, 2001) with Susan Hood.