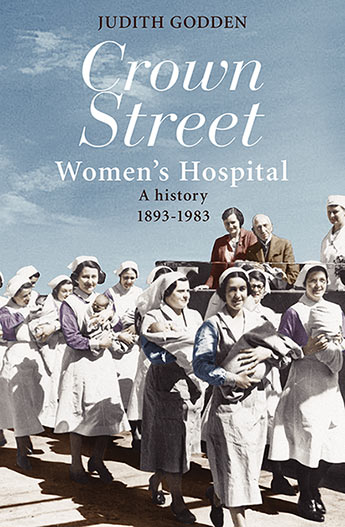 The history of Sydney's pioneering maternity hospital is also a history of medical care for women in Australia, from the days of untrained midwives to alternative birthing units.

Crown Street Women's Hospital was the largest women's hospital in NSW. Located in the heart of Surry Hills, it was a referral hospital for women throughout the State and a leading teaching centre for obstetricians and midwives. Affectionately known as 'Crown Street', an essential part of its role was caring for the poorest and most marginalised women in Sydney.

Crown Street became internationally famous after its success eliminating eclampsia, a major cause of maternal death. It was the centre of the thalidomide scandal and renowned for its care of newborn babies. From its first years, it sheltered homeless pregnant women; its later practices contributed to the grief of forced adoptions. It was where a stream of women went after botched illegal abortions. In its final years, its Birth Centre revolutionised birth practices in Australia. Among the many individual stories is that of May Yarrowick, who in 1907 became the first formally trained Aboriginal midwife, and that of Edna Shaw, Sydney's most popular matron.

The announcement of Crown Street's closure resulted in public uproar and demonstrations in the streets. This comprehensive history reflects Sydney's rich past, and reveals why Crown Street's 90 years had such a powerful impact on so many.
More books by this author

Judith Godden is a freelance historian specialising in the history of healthcare. She is a former academic at the University of Sydney and an Honorary Associate in its Department of History. Her previous books are: Lucy Osburn, a lady displaced; Australia's Controversial Matron; Australian Pain Society; and (with Carol Helmstadter) Nursing before Nightingale. She is an Honorary Fellow of the Australian College of Nursing and active in numerous historical organisations.