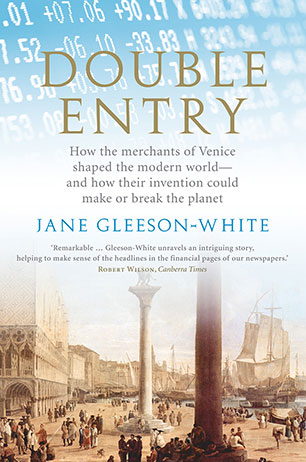 A fascinating exploration of how a simple system used to measure and record wealth spawned a cultural revolution. Prepare to have your idea of accounting changed forever.

'The rise and metamorphosis of double-entry bookkeeping is one of history's best-kept secrets and most important untold tales . Through its logic we have let the planet go to ruin-and through its logic we now have a chance to avert that ruin.'

Our world is governed by the numbers generated by the accounts of nations and corporations. We depend on these numbers to direct our governments, organisations, economies, societies. But where did they come from-and how did they become so powerful?

The answer to these questions begins in the Dark Ages, with the emergence in northern Italy of a new form of accounting called double-entry bookkeeping. The story of double entry reaches from the Crusades through the Renaissance to the factories of industrial Britain and the policymakers of the Great Depression and the Second World War. At its heart stands a Renaissance monk, mathematician and magician, and his celebrated treatise for merchants. With double entry came the wealth and cultural efflorescence that was the Renaissance, a new scientific worldview, and a new economic system: capitalism.

Over the past one hundred years accounting has flourished to an astonishing degree, despite the many scandals it has left in its wake. The figures double entry generates have become a sophisticated system of numbers which in the twenty-first century rules the global economy, manipulated by governments, financial institutions and the quant nerds of Wall Street.

And the story of double entry is still unfolding-because today it might be our last hope for life on earth.
More books by this author

Jane Gleeson-White is the author of Double Entry: How the merchants of Venice shaped the modern world - and how their invention could make or break the planet (2011), which won the 2012 Waverly Library Award for Literature and was shortlisted for the 2013 NSW Premier's Literary Awards, The Age Book of the Year Award and the Queensland Literary Awards. She is also the author of Australian Classics (2007) and Classics (2005). Jane is a PhD student in creative writing at the University of New South Wales and has degrees in economics and literature from the University of Sydney and was an intern at the Peggy Guggenheim Collection in Venice. She blogs at bookishgirl.com.au.