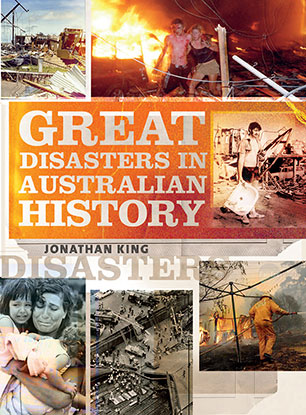 From the sinking of the Waratah to the West Gate Bridge collapse to the Granville train disaster to the Black Saturday bushfires, here are twenty-three peacetime disasters that changed Australia forever.

From bushfires to cyclones; sinking ships; train and plane crashes; mine explosions and bridge collapses; the Port Arthur massacre and the Bali bombings; Australia has suffered numerous terrible tragedies.

Bestselling author and historian Dr Jonathan King recounts the most extreme disasters to have hit Australia, opening each account with stories of the victims who died or whose lives were irrevocably changed by them, detailing the events and conditions that contributed to them, and telling inspiring tales of heroism and bravery in response to them.

Dr King also shows how many of the disasters were caused by avoidable human error or negligence and warns that global warming will cause ever more extreme weather events.

Dreadful as they've been, most Australian tragedies have resulted in constructive initiatives such as tighter gun controls in response to the Port Arthur shootings; stricter regulations for transport by air, sea and rail; and safer conditions for workers.

Thought-provoking and gripping, Great Disasters in Australian History takes you on a rollercoaster ride through more than a century of tragedies that have rocked our nation.

After a lifetime bringing history to life through re-enactments, books and films, award-winning Sydney historian and author of 30 books Dr Jonathan King is well placed to present Great Disasters in Australian History, a companion to his bestselling Great Moments in Australian History and Great Battles in Australian History. Dr King's work as a journalist and his experience of live events means he has experienced disasters first-hand. He sailed as part of the First Fleet Expedition of eleven tall ships from London to Sydney for Australia's bicentenary celebrations in 1988; re-enacted the voyage of Columbus to America, Banjo Paterson's 'Waltzing Matilda' and 'Man from Snowy River', the biblical nativity journey of Mary and Joseph through the Holy Land, and Matthew Flinders' circumnavigation of Australia. He is leading battlefield tours to Gallipoli and the Western Front for the centenary of World War I. He is married with children and grandchildren.